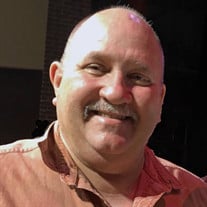 Services for Jay Hesse, 65, of Tyler will be held on Sunday, January 26, 2020 at 2:00 p.m. at Stewart Family Funeral Home with Rev. Jeff Gage officiating. The family will have a private interment. Mr. Hesse passed away Tuesday, January 22, 2020 at UT Health East Texas in Tyler. He was born August 6, 1954 in Tyler to Ella Mae and Raymond R. Hesse. Jay had a larger than life personality. He had many friends and had such a giving heart. His greatest joy was his Princess, Makaela, who called him Superman. If you had the pleasure of meeting Jay you were instant friends. Jay was co-owner of R&R Machine with his sister Helen which his dad, Ray, started as a young man. Jay was a very hard worker and always helped anyone in need. Jay was preceded in death by his parents and his father-in-law, John T. Craft. He is survived by the love of his life, Sandra Hesse which he married 34 years ago; sister, Helen Hesse True of Tyler and her children, Bill True of Austin, Tami Bollman (Andy) of Bullard; brother, Ray V. Hesse of Ohio; cousin, Suzanne Loudamy and family of Whitehouse; mother-in-law, Pauline Craft of Plantersville, MS; sisters-in-law, Lynda Kerr (Ken) of Pontotoc, MS, Janice Whitehead-Loyd (Tim) of Saltillo, MS; brother-in-law, Thomas Craft (Sissie) of Plantersville, MS; 26 nieces and nephews; his honorary children, Stephen Branch (Nikki) and their children, Peyton, Devin, Katie and Jace, Jennifer Turner (Justin) and their children, Kylie, Jaxson, Gillian and Lexie and grandchildren, Amelia Ann and Elliot Marie, Stephanie Troyer (Jeremy) and their children, Cole, Makaela, Payton and Raini, Shawn Tindall (Monica) and their children, Makaela, Grant and Kenlee. Pallbearers will be Shawn Tindall, Cole Bussell, Jaxson Elliot, Justin Turner, Stephen Branch and Jeremy Troyer. Honorary pallbearers will be Bill True and Andy Bollman. Visitation is scheduled from 1:00 – 2:00 p.m. on Sunday, January 26, 2020 at Stewart Family Funeral Home, 7525 Old Jacksonville Highway in Tyler. If desired, memorials may be made to Leukemia & Lymphoma Society at donate.lls.org.

Services for Jay Hesse, 65, of Tyler will be held on Sunday, January 26, 2020 at 2:00 p.m. at Stewart Family Funeral Home with Rev. Jeff Gage officiating. The family will have a private interment. Mr. Hesse passed away Tuesday, January 22,... View Obituary & Service Information

The family of Jay Hesse created this Life Tributes page to make it easy to share your memories.

Send flowers to the Hesse family.