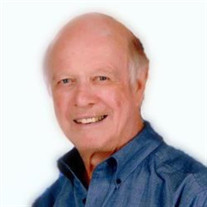 Jay D. Smith passed away surrounded by his family on the 14th day of June 2022 at the age of 88. Jay was a devoted husband, father, grandfather, and friend. He was born on April 4, 1934 in Nashville, Michigan to the late Glen and Grace Smith. Jay graduated from Battle Creek Academy, Battle Creek, Michigan and attended college in California for a year, then felt inclined to put his education on hold and joined the US Air Force serving in the Korean War. Upon his return to the states, Jay was stationed in Bryan, Texas and was introduced to Berniece Fowler his lifelong sweetheart who he married and spent 65 wonderful years with. They traveled throughout Europe and played golf in many countries. One of the highlights of Jay’s golfing experiences was playing the St. Andrews and Royal Troon courses in Scotland. He was very active in Hollytree golf, serving in various capacities, along with being president of the SMGA in 2000. Jay acquired his private pilot’s license in the 70’s and enjoyed many hours in the air. In 1962 Jay returned to college after being out of school for 11 years and enrolled at Texas A&M, placing out of 15 hours in accounting. He graduated in the top 10% of his class in January 1965 with a BBA in Accounting. He was a CPA and worked in the industry in Dallas until 1984 when he decided to vary his career, he purchased dry cleaning locations in Tyler and retired in 1999. Jay was a member of Green Acres Baptist Church for 35 years, attending Sunday School and taking part in mission trips. He was a member of Tyler Sunshine Rotary, served as International Director, and was instrumental in delivering an ambulance loaded with medical supplies to Guatemala to an area that was desperately in need. Jay is survived by his devoted wife, Berniece; son, Michael Jay Smith of Tyler; daughter, Cathy Annette Munden of Log Cabin; grandchildren, Samantha Blair and husband Cody of Cypress and Maxwell Michael Munden of Austin; and 2 great-grandchildren, Kellan and Kennedy Blair; brother-in-law, Ned Fowler and wife Donna of Nacogdoches; and many nieces and nephews. He is preceded in death by his brother-in-law and sister-in-law, H.H. and Polly Richardson, and special son-in-law, Kirk Munden. A Celebration of Life service will be held at Stewart Family Funeral Home on Saturday, June 18, 2022 at 3:00 p.m. Honorary Pallbearers will be members of Mike Van Vleet’s Sunday School Class. In lieu of flowers, if so desired, memorials may be made to the Alzheimer’s Alliance of Smith County, 3531 S. Broadway, Tyler, TX 75701 (www.alzalliance.org) or the Humane Society Pets Fur People, 1823 County Road 386 Tyler, TX 75708 (www.petsfurpeople.org) or a charity of your choice.

Jay D. Smith passed away surrounded by his family on the 14th day of June 2022 at the age of 88. Jay was a devoted husband, father, grandfather, and friend. He was born on April 4, 1934 in Nashville, Michigan to the late Glen and Grace Smith. Jay... View Obituary & Service Information

The family of Jay D. Smith created this Life Tributes page to make it easy to share your memories.

Jay D. Smith passed away surrounded by his family on the 14th...

Send flowers to the Smith family.