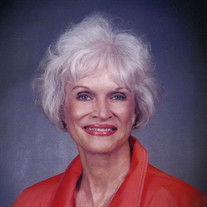 Eugenia Ann (Stroud) Hibbs, 83, passed away in her home Saturday, January 8, 2022, of natural causes. “Jeannie” was a loving wife, mother, grandmother, and friend who was funny, smart, sassy, generous, and supportive. She was a true “Renaissance Woman” who helped make the world more beautiful. Survivors include son Billy E. Hibbs, Jr., daughter-in-law Tisa Weiss Hibbs, grandson Stratton Weiss Hibbs, granddaughter London Elizabeth Hibbs, brother Michael Glenn Stroud, and nieces, nephews, and cousins. Jeannie was born February 21, 1938, in Bonham, Texas, to Alvis Eugene and DeDee Hill Stroud. She was raised in Mineola, Texas, the daughter of a Texas & Pacific Railroad engineer and a homemaker. Baptized in the Church of Christ, she was a 1956 graduate of Mineola High School. She met Billy Hibbs, the love of her life, at a football game, and they became lifelong sweethearts. Shortly after Billy’s Quitman High School graduation, they married on June 2, 1957, and were blessed with their only child 9.5 months later. They were happily married for 48 years before Billy succumbed to early onset Alzheimer’s in 2005. In her early years, Jeannie enjoyed a successful career as a model and actress. She also helped Billy establish and grow a local insurance agency into one of the largest organizations of its kind in the nation. Beginning with Hibbs-Hallmark & Company in the 1960’s, the firm expanded to include 7 different insurance and risk management businesses now known collectively as Heartland Security Insurance Group. She was also active in the family real estate business, Hibbs Financial Center. In the late 1970s, Jeannie co-founded “The Willows” art gallery. Her knowledge and love of art played an important role at Heartland Security Insurance Group, and over the course of two decades, she selected over 400 pieces of “Early Texas Art” to beautify the various Heartland offices. Jeannie strongly believed that art and furnishings would have a positive impact on the morale and attitude of everyone in the office. Landscaping was her next focus as she designed a sculpture garden at Heartland’s headquarters in Tyler. For over 15 years Jeannie served as Heartland’s Honorary Board Chair and loved all of the fine people associated with the family business. As President of the Hibbs Family Foundation since its inception, she oversaw contributions to local and global Christian missions, not-for-profit organizations, education, and the arts. She was active in the Tyler Rose Festival, Sister Cities, Women’s Symphony League, Katherine Speas Junior Garden Club, American Contract Bridge League, Tyler Duplicate Bridge Club, CASETA (Center for the Advancement and Study of Early Texas Art) and the Tyler Civic Theatre where she appeared in many plays over the years. The Boy Scouts of America awarded her the “Distinguished Citizen Good Turn Award” in 2013. She was also instrumental in founding the Hibbs Institute of Business and Economic Research at the University of Texas at Tyler. Jeannie and Billy were active members of Marvin United Methodist Church since 1982, and members of the Pairs and Parents Sunday School Class. Jeannie was lovingly cared for in her home by her family and trusted caregivers Brenda, Anel, Elizabeth, LaSonya, and Jacinta. A Celebration of Life will be held at Marvin United Methodist Church on Friday, January 14, at 3:00PM in the main sanctuary under the direction of Stewart Family Funeral Home. Honorary pallbearers will be the Directors of Heartland Security Insurance Group. In lieu of flowers, the family requests donations be made to the Marvin United Methodist Church Music Ministry, Marvin Eternal Flame Fund, Marvin UMC Foundation, or the charity of your choice. Livestream the service at: marvinumc.com/ministries/memorial-service.

Eugenia Ann (Stroud) Hibbs, 83, passed away in her home Saturday, January 8, 2022, of natural causes. &#8220;Jeannie&#8221; was a loving wife, mother, grandmother, and friend who was funny, smart, sassy, generous, and supportive. She was a... View Obituary & Service Information

The family of Jeannie Hibbs created this Life Tributes page to make it easy to share your memories.

Eugenia Ann (Stroud) Hibbs, 83, passed away in her home Saturday,...

Send flowers to the Hibbs family.