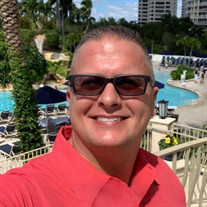 Services for Jeffery Roland Nash, Sr., 48, of Tyler will be held on Sunday, April 3, 2022, at 2:00 p.m. at Stewart Family Funeral Home with Pastor David “Took” Martin officiating. Burial will follow at Cathedral in the Pines cemetery in Tyler under the direction of Stewart Family Funeral Home. Jeff passed away Monday, March 21, 2022, in Dallas. He was born April 25, 1973, in Tyler, Texas to Roger and Carolyn Nash. He grew up and lived his entire life in Tyler. He was a 1991 graduate of Robert E. Lee High School. Jeff was preceded in death by his maternal grandfather Roland C. “Red” Acker and paternal grandparents J.B. and Louise Nash. He is survived by his loving family including his parents Roger and Carolyn Nash, son, Jeffery R. Nash, Jr., and daughter Kaitlyn Ann Nash. Jeff is also survived by his maternal grandmother Doris Acker, his brother Jason Nash and sister-in-law Rachele Nash, and nephews and niece Benjamin, Hank, and Phoebe Nash. Jeff had numerous family members on both the Acker and Nash sides that he held dear to his heart. Jeff was the Executive Manager at Peltier Nissan in Tyler. He began his amazing career with Peltier Enterprises that spanned over four decades, beginning in 1994 at age 21. Jeff touched so many lives over his career, but he would be the first to acknowledge it would have never been possible without those that mentored him. What truly made Jeff special was the friendship and regard he showed literally everyone, regardless of position, title, or rank. He treated everyone with the same respect and dignity. Jeff met every day head on with unparalleled enthusiasm, and his work ethic was simply unmatched. But even that could not beat the smile he greeted everyone with. The Peltier Enterprise family–and the East Texas community at large–lost a truly great one. For pleasure, Jeff enjoyed spending time at his farm, feeding and playing around with his animals and riding his Ranger over the property. He was also looking forward to his brother Jason and his family moving back to Tyler, and was anxious to spend family time at his lake house on Lake Tyler with them. Jeff absolutely loved his family. He strived to instill in both Jeffery and Kaitlyn the values he held most dear. He was so very proud of Jeffery and his achievements–some might even say he is a pretty fine car man in his own right. He was also looking forward to Kaitlyn graduating from Texas State University this year and his “babygirl” then pursuing her postgraduate education in the medical field. Jeff was so completely loved and admired by his parents. The joy he brought to them was indescribable. He showered them with his sweet, kind, loving, and generous nature. Jeff was so proud of his brother, Jason. The bond they had, there was absolutely nothing they would not do for each other. Jeff would be the first to thank the medical professionals at UT Southwestern in Dallas, as well as all of those that cared for him through such a trying time. Pallbearers will be Johnny Acker, Justin Acker, Chesley Acker, Eric Jones, Steven Flores, and Doug Tipton. Honorary pallbearers will be Robert Peltier, David Bates, Cune Peña, Joshua Hartman, Michael Terry, William Neff, Steve Voigt, Robert Adkison, Monte Hall, Brian Carter, Jeremy Jones, and Cody France. Visitation is scheduled from 6:00 – 8:00 p.m. on Saturday, April 2, 2022, at Stewart Family Funeral Home, 7525 Old Jacksonville Highway in Tyler.

Services for Jeffery Roland Nash, Sr., 48, of Tyler will be held on Sunday, April 3, 2022, at 2:00 p.m. at Stewart Family Funeral Home with Pastor David &#8220;Took&#8221; Martin officiating. Burial will follow at Cathedral in the Pines cemetery... View Obituary & Service Information

The family of Jeff Nash Sr. created this Life Tributes page to make it easy to share your memories.

Services for Jeffery Roland Nash, Sr., 48, of Tyler will be held...

Send flowers to the Nash family.