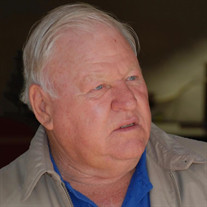 The Celebration of Life at Emerald Bay Community Church has been postponed until further notice. Jerry Leland Ball passed away at his home in Emerald Bay, February 26, 2020. He was born January 17, 1936, in Chickasha, Oklahoma, to Leland James and Marjorie Dunkin Ball. Jerry spent his early years in southern California and Oklahoma. At the age of 8, his family moved to Midland, Texas, where he graduated from Midland High School. In March, 1955, he married his wife of 65 years, Jaynan Edwards Ball. They lived and raised their family in Odessa where he worked in the chemical and oil industry. In 1977, he moved to Kilgore, Texas, where he established Fas-Line Industries, which he owned and operated for thirty years. After selling his company, he was free to pursue his passion - all things related to cars. Jerry and Jaynan spent many years travelling, attending and participating in car shows, auctions, rallies and various automobile events. He created his museum of fine automobiles, including an extensive collection of memorabilia, and enjoyed sharing his knowledge and collection with friends and others who shared his interests. One of his most memorable highlights was in 1996 when he participated with his son, Lee Jay, in The Great Race, which covered 4,000 miles across the United States and Canada, winning the Rookie Division in their 1933 Dodge. Jerry is survived by his wife, Jaynan Ball; two sons, Charles Ball (Troylyn), Leland Ball (Patricia); one daughter, Jeri Nan Ball Johnson (Rinny); grandchildren, Marshall, Coulton and Luke Ball, and Baker (Marty) Johnson, Sean (Tiffany) Johnson, Landry (Josh) Norris; and two great-grandchildren. Charities that he valued and supported were Emerald Bay Women’s Club Benevolence Fund, P.O. Box 891, Bullard, Texas 75757, Breckenridge Village - breckenridgevillage.com, and East Texas Crisis Center - https://etcc.org.

The Celebration of Life at Emerald Bay Community Church has been postponed until further notice. Jerry Leland Ball passed away at his home in Emerald Bay, February 26, 2020. He was born January 17, 1936, in Chickasha, Oklahoma, to Leland James... View Obituary & Service Information

The family of Jerry Leland Ball created this Life Tributes page to make it easy to share your memories.

The Celebration of Life at Emerald Bay Community Church has been...

Send flowers to the Ball family.