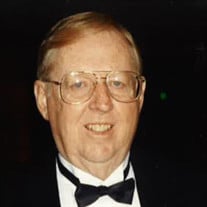 Jerry Menefee Bower, 83, of Tyler, passed away on January 26, 2021 after a period of declining health. Jerry was born June 14, 1937 in Fort Meade, Maryland to the late Col. Laurence Robert Bower and Florence Menefee Bower. As a child, he enjoyed the life of a military family living in multiple countries before settling in San Antonio, Texas, where he attended Alamo Heights High School and Texas A&M University. He continued his family’s commitment to our country by serving in the United States Army. A devoted husband and father, spending time with his family was his greatest joy. What was intended to be a temporary stop in Tyler, Texas on a work assignment in the 1960’s, turned into a lifelong home after meeting a caring nurse named Diane, who would become his wife of fifty-two years. Jerry loved his girls and the simple moments that created lifelong memories such as family dinners, vacations and any opportunity to spend time with those closest to him. Jerry was a God-fearing man who placed Christ at the center of his life and faithfully led his family, always with an uplifting spirit. A member of Green Acres Baptist Church for thirty-eight years and former member of Southern Oaks Baptist Church, he served as Deacon Emeritus, enjoyed mentoring youth and always had a servant’s heart that could recognize when others needed a friend, kind word or listening ear. Throughout his career in sales, including his leadership at Dennard Supply Company in Tyler, he formed true friendships with his customers and colleagues and loved the years he spent working within the Tyler community. His fellow restaurant and food service industry colleagues knew that no one loved or knew more about the inside of a commercial kitchen than he. Jerry spent much of his career supporting and volunteering with the East Texas Restaurant Association, Texas Restaurant Association and the East Texas Food Bank. Known for his kindness, humor, encouragement and wisdom, he loved spending time with others and never met a stranger. Jerry had a gift for making others feel valued, and he always brought joy to the room. His witty disposition and positive outlook on life was contagious. Above all, Jerry lived his life always adapting to life’s circumstances and believing that the best was yet to come. He leaves a legacy of faith, hope, honesty and sincerity. He is survived by daughters, Judie Bower and Jamie Bower Andrews; son-in-law, Brad Andrews; granddaughters, Allie and Blaire Andrews of Tyler as well as many extended family members whom he loved. He was proceeded in death by his loving wife, Mary Diane Bower, sister, Dorothy Bower Senich and brother, Laurence Robert Bower, Jr. A private burial will be held at Fort Sam Houston National Cemetery in San Antonio, Texas. Memorials may be made to the East Texas Food Bank, 3201 Robertson Road, Tyler TX 75701 or Meals on Wheels East Texas, 3001 Robertson Road, Tyler TX 75701.

Jerry Menefee Bower, 83, of Tyler, passed away on January 26, 2021 after a period of declining health. Jerry was born June 14, 1937 in Fort Meade, Maryland to the late Col. Laurence Robert Bower and Florence Menefee Bower. As a child, he enjoyed... View Obituary & Service Information

The family of Jerry Menefee Bower created this Life Tributes page to make it easy to share your memories.

Send flowers to the Bower family.