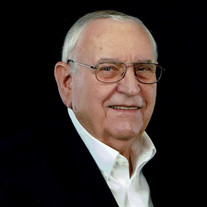 Jerry Floyd Caddy, 82, of Tyler, Texas passed away on March 19, 2022. Jerry was born on May 21, 1939 in Manning, Arkansas, the oldest child of Floyd Burl and Marjorie Helen (Lea) Caddy. Jerry married Jeanetta Lorene Daily on June 22, 1957 in Sparkman, Arkansas. They began an adventurous life together filled with multiple living locations and more importantly included many years of faith, family, friends, and fun. Jerry and Jeanetta welcomed their only child, Rod, in 1958. Jerry was a gifted businessman which included a career in radio and cable television including working for Robert M. Rogers in Tyler. He went on to own businesses in Arkansas and Colorado and worked as a consultant in Texas and South America. All acquainted with Jerry knew he was a continuous learner and an avid reader. Books took him to the places he had not yet traveled. In mid-life, Jerry learned enough Spanish to converse on business matters and order a good meal! His love of studying the Bible allowed him the honor of teaching many church classes including the John Stroud Sunday School Class at Green Acres Baptist Church in Tyler. While a man of tall stature and a booming voice, Jerry could also be a gentle giant. To Jeanetta, he was a lifelong partner. To his son, he was a mentor. To his only grandchild, Hallie, he was just “Papa” who rarely missed an important event and encouraged her to take every opportunity in life. To the various animals at his treasured east Texas farm, he was the man who rubbed their ears, gave them treats, and toted them around for daily buggy rides. Jerry was preceded in death by his parents and his special Aunt, Clarice Lea. He is survived by his wife, Jeanetta of Tyler; son, Rod (Deborah) of Fort Worth; granddaughter, Hallie (Chaz) of Nashville, TN; sister, Patricia Waite of Lindale, TX; brother, Morris Caddy (Marie) of Hot Springs, AR; and several nieces and nephews. Visitation and Service will be on March 22 beginning at 1:30 PM at Stewart Family Funeral Home in Tyler. Memorials may be sent to Bethesda Health Clinic in Tyler, 409 W. Ferguson St., Tyler, TX 75702 (https://Bethesdaclinic.org), or Mission: Dignity in Dallas, P.O. Box 819109, Dallas, TX 75381 (www.guidestone.org), or South Texas Children’s Home in Beeville, TX, P.O. Box 759, Beeville, TX 78104 (https://www.stchm.org).

The family of Jerry Floyd Caddy created this Life Tributes page to make it easy to share your memories.

Send flowers to the Caddy family.