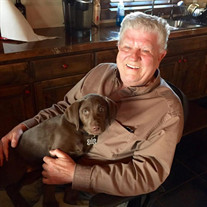 Jerry John Spencer, 75, passed away peacefully in the arms of his loved ones on October 29th, 2021 after a courageous battle with a lengthy illness. Jerry was born on March 12th, 1946 to Gertrude and Jerome Spencer in Jacksonville, Texas. Following graduation from Athens High School, Jerry attended and graduated from East Texas State University. The call to serve his country came on December 20, 1968. He responded with the same commitment and devotion that Jerry was known for through his years. He proudly served as a Captain in the United States Marine Corps. While in the Marine Corps, he served during the Vietnam War and received numerous accommodations and medals, including a Bronze Star for his service. While in Vietnam, Jerry was a Motor Transport Officer, in charge of many vehicles and personnel. Jerry's favorite sayings was: “The Pride don't ride, without Motor Transport! The Marines strengthened his leadership ability and instilled discipline that would serve him the rest of his life. When you are a Marine, you are always a Marine. Jerry took that same fighting spirit throughout his life. Throughout his illness and even in his final days the Marine fight and the “Never Give Up,” attitude remained strong. After serving his country, Jerry would graduate from the University of Houston as a certified public accountant. That degree would be the launching pad for many business ventures. Jerry was a self-made man with quick wit, a life-long love of learning, and an undeniable brain for business. His first big job out of college was working at Squires. He had many jobs, but his passion was trading in the stock market and for his company, Spencer Distributing LP. Jerry’s commitment to the community where he lived and worked was evident as he served on many boards, most recently, the Christus Trinity Mother Frances Foundation Board of Directors and as a member of the UT Tyler Patriot Golf Classic Society. Jerry also served as the 2008 Director of the Royal Order of Jesters in the Tyler Court #168. The Shriners brotherhood and camaraderie he built during his years brought great joy and laughter to his life. Jerry had many passions in his life; history, reading, storytelling, traveling, golfing, and spending time with his loved ones. He was truly one of a kind and always looked for the best in others. He had a big impact on those he mentored and made such a difference to so many. One of his favorite things in his life was spending time with his granddaughter Presley, whom she always called him “Paw”. Out of all of the places he has traveled and all of the experiences he has had, his favorite place to be was at his ranch in Palestine. It was his go to place to escape to find peace and joy. Jerry’s love of Dead Cat Ranch is shared with family and will be his legacy for generations to come. He was predeceased by his parents, Gertrude and Jerome Spencer; grandparents, John Floyd and Lottie Mallory; and uncles, L.A. Mallory and Hayden Mallory. Jerry is survived by his wife of 33 years, Becky Spencer; daughter and son-in-law, Stacy and Josh Betts; granddaughter Presley Betts; brother Steve Spencer and niece Stephanie and Dustin Pundt; aunt Doris Mallory of Tyler; cousins, Pam Mallory of Tyler, Blake and Brittany Mallory of Fort Worth and Kristen and Scott Ray and their children, Cason Ray, Corbin Ray and Chloe Ray, all of Frisco, and cousins, Larry Mallory and wife Betty, Nettijon Shock, Sherry Goen and husband Jerry, and Sue Prowse and husband Lynn. The family will receive friends at Stewart Funeral Home of Tyler on Tuesday, November 2nd from 5:00 pm until 7:00 pm. The service will be held at 10 a.m. Wednesday, Nov. 3rd at Green Acres Baptist Church in Tyler in the chapel. In lieu of flowers, please donate the Shrine Burn Hospital in Galveston https://www.shrinerschildrens.org/en

Jerry John Spencer, 75, passed away peacefully in the arms of his loved ones on October 29th, 2021 after a courageous battle with a lengthy illness. Jerry was born on March 12th, 1946 to Gertrude and Jerome Spencer in Jacksonville, Texas. Following... View Obituary & Service Information

The family of Jerry John Spencer created this Life Tributes page to make it easy to share your memories.

Jerry John Spencer, 75, passed away peacefully in the arms of...

Send flowers to the Spencer family.