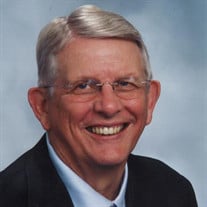 Jerry P. Yandell passed away peacefully at Mother Francis Hospital on April 18, 2020, with family members at his side. He was born to Roy and Gladys Yandell on February 16, 1938, in Mineola, Texas. Jerry grew up in Greenville, Texas, where he met his childhood playmate and future bride, Janice Permenter, when they were just five years old. He graduated from Greenville High School in 1956 and from the University of Texas in 1960. He was an avid Texas Longhorn fan. Jerry and Janice were married in 1957 and moved to Tyler in 1961, when he was hired by General Electric. They have lived in Tyler for 59 years and have been active members of Green Acres Baptist Church, where he served as chairman of the deacons and taught Sunday morning Bible study to numerous age groups ranging from third graders to newlyweds to adult men. Jerry also served in the community with the Tyler-Smith County Children’s Service for many years. In 1979, he was hired by TCA Cable where he ultimately retired as Senior Vice President. Since retirement, he has enjoyed traveling, golfing, and spending time with family and friends, who were blessed to share his loving and gentle spirit as well as his sense of humor and generous heart. He was preceded in death by his parents, Roy and Gladys Yandell and infant son, Patrick Yandell. He is survived by his wife of 62 years, Janice Yandell; sister, Linda Measel and husband John; son, Kevin Yandell and wife Ann; daughter, Kristi Layton and husband Frank; two granddaughters, Kate Layton and Rachel Weeks and husband Josh; two great-grandchildren, Jaxton and Presley; nieces, Kelli Marcatel and Kirsten Permenter; nephew, Dorn Permenter; and several great-nieces and nephews. A private family graveside service will be held at Cathedral in the Pines under the direction of Stewart Family Funeral Home. A memorial service will be held at a later date. In lieu of flowers, donations may be made to Green Acres Baptist Church, 1067 Troup Hwy, Tyler, TX 75701, Gideons International, P.O. Box 140800, Nashville, TN 37214, or a charity of your choice.

Jerry P. Yandell passed away peacefully at Mother Francis Hospital on April 18, 2020, with family members at his side. He was born to Roy and Gladys Yandell on February 16, 1938, in Mineola, Texas. Jerry grew up in Greenville, Texas, where... View Obituary & Service Information

The family of Jerry Pat Yandell created this Life Tributes page to make it easy to share your memories.

Send flowers to the Yandell family.