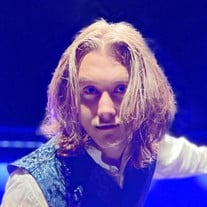 Memorial services for Jesse Paul McNeely, 17, of Tyler will be held on Saturday, July 10, 2021 at 2:00 p.m. at Stewart Family Funeral Home Chapel. Jesse passed away Wednesday, June 30, 2021 in Tyler. He was born March 9, 2004 in Bryan to Kevin Paul McNeely and Lori Renee Wages. Jesse has been lovingly raised by his mother and stepfather Mitchell David Wages. Jesse attended Cumberland Academy in Tyler, TX and was a member of Cumberland’s One Act Play and Theater Department. Jesse filled his spare time working at Panera Bread, playing video games and listening to music and spending time with friends and family. Jesse was preceded in death by his father, Kevin McNeely and grandparents, Eugene and Dorothy McNeely. He is survived by his loving family including his mother and stepfather, Lori and Mitchell Wages of Tyler, TX; siblings, Jacob and Olivia Wages of Tyler, TX; grandparents Cindi Collins of Quitman, TX; Otis Watkins of Snook, TX and Rodney and Linda Johnson of Tyler, TX. He will also be missed by aunts and uncles, Amanda Watkins of Quitman, TX; Madison Collins of Houston. TX; Blair and Sabrina Watkins of Fort Worth, TX; Shawn and Dan Morton of Florissant, MO; and Mark McNeely of Florissant, MO. Jesse had numerous cousins and other family members that will miss him terribly. If desired, memorials may be made to the Cumberland Academy Theater Arts Department in Jesse’s name.

The family of Jesse Paul McNeely created this Life Tributes page to make it easy to share your memories.

Memorial services for Jesse Paul McNeely, 17, of Tyler will be...

Send flowers to the McNeely family.