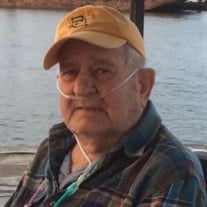 Memorial services for Jim Crabtree, 91, of Flint will be held on Saturday, May 8, 2021 at Stewart Family Funeral Home in Tyler, TX. Rev. Gary Murphy (nephew) will be officiating services at 2:00 p.m. with visitation starting at 1:00 p.m. Live-streaming will be available 5 minutes before the service on the "photos and video" tab. Mr. Crabtree passed away Saturday, May 1, 2021 in Flint. He was born October 14, 1929 in Ranger, TX to William Burton Crabtree and Alice Pearl Whitmire Crabtree. After graduating from Ranger High School in 1946, he enlisted in the US Army and served as a Military Police Officer. He received the World War II Victory medal and the Army of Occupation Medal – Japan. Following his military service, living in Waco, Jim became a Free Mason, graduated from Baylor University, and went on to have a successful career in the sales of industrial instrumentation field. Following retirement, he and his wife enjoyed traveling full-time in their RV and fishing. In 2004, they settled in Flint, TX Jim is survived by his wife, Ruby; son, Jimmy M. Crabtree; daughter, Debra Pitts and husband, Don; son, Tony Crabtree and wife, Margaret; grandchildren, Eric Carlson and wife Joanna; Elinda Carlson, and Cassandra Crabtree; great-grandson, Trevis Carlson. He is also survived by many extended family members. Jim was preceded in death by his parents; brother, Arthur; and daughter, Pat Matonis; sister, Fay Bargsley and husband, Coy; half-brothers, Jack and Raymond Murphy; and other family members. Visitation is scheduled from 1:00 – 2:00 p.m. on Saturday, May 8, 2021 at Stewart Family Funeral Home, 7525 Old Jacksonville Highway in Tyler. Graveside service in Ranger, TX will occur at later date. In lieu of flowers, donations can be made to Strawn Masonic Lodge #906, PO Box 214, Strawn, TX 76475; The Hospice of East Texas in Tyler, TX (hospiceofeasttexas.org); Brown Trail School of Preaching, 1801 Brown Trl, Bedford, TX 76021.

Memorial services for Jim Crabtree, 91, of Flint will be held on Saturday, May 8, 2021 at Stewart Family Funeral Home in Tyler, TX. Rev. Gary Murphy (nephew) will be officiating services at 2:00 p.m. with visitation starting at 1:00 p.m. Live-streaming... View Obituary & Service Information

The family of Jim Crabtree created this Life Tributes page to make it easy to share your memories.

Memorial services for Jim Crabtree, 91, of Flint will be held...

Send flowers to the Crabtree family.