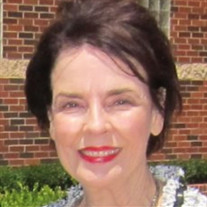 Joan Shaver Muller joined her Lord and Savior in Heaven on Friday, July 31, 2020. Family visitation will be from 5 – 7 p.m. at Stewart Family Funeral Home in Tyler, Texas, on Thursday, August 6, 2020. Private family graveside services at will be held at Rose Hill Cemetery in Tyler. A memorial service, celebrating Joan’s life, is scheduled for 11:00 a.m. Friday, August 7, 2020, at Marvin United Methodist Church in Tyler. It will be live streamed on Marvin Facebook Live: https://www.facebook.com/Marvin.UMC/live. Joan was born on Thanksgiving Day, November 26, 1942, to Edward Braxton Shaver, Jr. and Magga Faye Yarbrough Shaver, in Knox City, Texas. She graduated from Knox City High School in 1961, where she exceled academically and participated in basketball, band, and track. While growing up in Knox City, Joan was surrounded by a closely knit group of extended family. She always held close to her heart her childhood memories and the values she learned in rural West Texas. As a child, Joan spent much of her time with her parents, brother, grandparents, and cousins, and continued to nurture and cherish those relationships throughout her adult life. Throughout her retirement, Joan enjoyed researching her family’s history and writing about her family memories Joan attended McMurray College, in Abilene, Texas where she graduated in 1965 with a B. A. in English. In addition to her academic accomplishments, Joan was involved in many extra-curricular activities at McMurray. She was president of the Delta Beta Epsilon sorority and held officer positions in Kappa Delta Pi, the Student Education Association, and the Inter-Club Council. She was also a member of Alpha Chi. After graduating from McMurray, Joan went on to Lubbock to attend Texas Technological College (TTC) (now Texas Tech University), where she received a Master of Arts in English. After graduating from TTC, Joan took a job teaching English composition at Amarillo College, in Amarillo, Texas. Shortly thereafter, Joan was invited by some of her friends to join them for blind dates with three Air Force officers. One of the officers that evening was Captain John Muller whom she would marry in August of 1968. The couple eventually moved to Austin, where Joan taught English at Reagan High School. While in Austin, a daughter (Annika) and a son (Edward) were born to the couple. Joan worked on several political campaigns during her time in Austin. She enjoyed following politics and always loved a good political debate! Shortly, after their son’s birth, the family moved to Beaumont, Texas. There, Joan devoted much of her time to raising her two young children, she was an active volunteer for the Beaumont Art Museum, and an active member of several women’s clubs. During a trip to San Francisco, Joan was introduced to a fashion consultant, and Joan’s latent interest in fashion was aroused. Her organizational talent led her to become the national sales director for Strategic Imaging, and she promoted various events and groups throughout the nation. Joan enjoyed the challenge of the public relations aspect of her work, and equally treasured the friendships made and the opportunity to travel throughout the United States. In 1979, the family moved to Tyler and Joan continued in her role at Strategic Imaging. As her children approached high school graduation, Joan was offered an opportunity to teach English composition and English literature at Tyler Junior College. While teaching full-time at TJC, Joan served as a member on several boards and committees until her retirement in 2004. Joan was always active in the Tyler community. She was a member of the Women’s Symphony League, Tyler Museum of Art, The Tyler Garden Club, Mildred Floyd Garden Club, and Criterion Club. Her involvement in these organizations provided her with many lifelong and lasting friendships. Joan loved people and she loved life. She was a person who personified grace, elegance, and class. She adored a beautiful West Texas sunset and looked forward to the Texas wildflowers in the spring. The hymn Amazing Grace always touched her when sung in church. She loved to have dinner parties and entertain friends and family in her home. She was always excited to travel and see new places. Additionally, she truly had a gift for making those around her feel welcomed, loved, and important. Some of her favorite memories were of taking her elderly mother on her first trips to New York, San Francisco, and Europe. It always meant so much for Joan to see her mother so happy! Joan also cherished spending time with her young granddaughters. Joan was predeceased by her beloved parents. Survivors include her devoted husband, John of Tyler; daughter, Annika and Brent Conaway of Tyler; son, Edward and Laurin Muller of The Woodlands, Texas; granddaughters, Annelise and Christine Conaway of Tyler, and Katherine and Alexandra Muller of The Woodlands; brother, Brack and D’Anna Shaver of North Richland Hills, Texas; and brother-in-law Miles and Suzanna Muller of Staples, Texas; plus a very special niece, nephews, cousins, and many dear friends and neighbors. The family wishes to thank Joan’s special caregivers Pat Hill and Lisa Madison. Their love and caring expertise were invaluable during our separation from Joan, due to the coronavirus pandemic. We also wish to thank the wonderful nurses and staff at Heart to Heart Hospice and Meadow Lake Memory Care. Our family is grateful for your heartfelt work. If desired, please send memorials to Alzheimer’s Alliance of NE Texas, Inc. 211 Winchester Dr., Tyler, Texas 75701; Tyler Junior College Foundation, P. O. Box 9020, Tyler, Texas 75711; or Marvin UMC 300 W. Erwin St., Tyler, Texas 75702.

The family of Joan Shaver Muller created this Life Tributes page to make it easy to share your memories.

Joan Shaver Muller joined her Lord and Savior in Heaven on Friday,...

Send flowers to the Muller family.