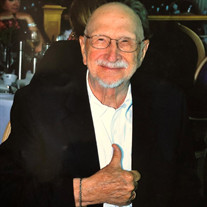 John Oakley Childs of Tyler went to be with his savior on August 18, 2020 in the comfort of his home surrounded by his family. A memorial service will be held Thursday, August 20, 2020 at 2:00 p.m. in the Green Acres Baptist Church Chapel, with Dr. David Dykes, Rev. Warren Culwell, and Rev. Woody Woodward officiating. A private burial will take place prior to the service at Rose Hill Cemetery. On Wednesday, August 19, 2020, a viewing will be held from noon to 7:00 p.m. at Stewart Family Funeral Home. Dukie was born and raised in Jacksonville, Texas. He was affectionately known to family as little brother, Dad, Pops and Ruff Ruff. Fish Childs entered Texas A & M in the Fall of 1949. His class, the Class of 1953. was the last class to live at the Annex. He graduated from Texas A & M College in Aug 1953 with a degree in Mechanical Engineering and has a Master’s Degree in Personnel Administration from The George Washington University. During his years at Texas A & M, Childs was a member of the corps of cadets, a terrific P Head, company commander of an all Fish Infantry Company and a senior yell leader. He was a charter member of the Memorial Student Center Student Committee. One of his favorite stories went, as follows: “Not many people know of the time I “met” L.G. Dupree, Baylor’s tough running back on the Baylor campus the night before the Aggie football game, and the reason is that it was a stupid and naive thing to do and I praise God I was able to get out of Waco with my life and boots.” Upon graduation from A & M, Dukie was commissioned a second lieutenant of Infantry in the Regular Army. Childs served over 21 years in the U.S. Army, primarily as an Infantry unit commander. He had two tours of duty in Viet Nam and commanded the 2nd Battalion of the 506th Airborne Infantry, 101st Airborne Division in combat. (This is the Battalion that was home to the “Band of Brothers” rifle company.) He was a qualified paratrooper, a Ranger and received several combat decorations including the Bronze Star for Valor and the Distinguished Flying Cross. John's military career culminated at West Texas State University in Canyon, Texas where he served as the Professor of Military Science. He retired as an Infantry Lieutenant Colonel in 1974. In Canyon, John served as marketing officer for the First National Bank for four years. He was an active member of several civic organizations including serving as President of the Canyon Chamber of Commerce. In 1978, John and his family moved to Tyler, Texas where he was Senior Vice President for marketing at Heritage National Bank. In 1986, John began a new career as instructor in the School of Business and Director of Continuing Education at the University of Texas in Tyler. He retired as Business Officer of Jacksonville College in Jacksonville, Texas in 1994. Civic organizations have been a top priority of service. He was a Rotarian for over forty years and served in two separate clubs, the Rotary Clubs of Canyon and Tyler. John served in various capacities at the club and district level and was District Governor of District 5830 in 1994-95. During that year, he initiated the first RYLA program for the District. He gained his nickname "One O'clock John" during his year as District Governor for the brevity of his speeches and desire that Rotary meetings be kept short and to the point. “One O'clock” John was a top-notch instructor from 1996 to 2008 at the Lone Star Presidents Elect Training Seminar which was responsible for training Rotary Club Presidents for the state of Texas. He served as the Operating Chair for the Lone Star Presidents Elect Training Seminar in 2002. John also served as president of the Smith County American Cancer Society and served on the following boards: Goodwill Industries of East Texas, Tyler-Smith County A & M Club, East Texas Deaf and Hearing Council and the Tyler Independent School District. John was also on the Board of Trustees of East Texas Baptist University in Marshall, past board member of San Marcos Baptist Academy, and the Paraguay Baptist Hospital Foundation. Dukie was an active member of Green Acres Baptist Church where he served as a deacon and taught a large adult Sunday school class for over forty years. Family was a priority to John, He married Thelma Ruth Stephens of Leesville, Louisiana, The Love Of His Life. They have three sons, John Oakley Childs Jr., a special needs boy who is cared for by the state of Louisiana, Stephen (Brenda) of Tyler, and Charlie (Lisa) of Kingwood. There are six grandchildren, Allison, Brian (Allie), Hannah, Catherine of Houston, Clint (Brittany) of Tyler, Chris (Jessica) of Alexandria Va.; and two great-grandsons, Oakley Childs of Alexandria Va. and Sam Childs of Houston. John (little brother) loved his sisters, Peggy Ann Morrison of Fort Worth and Nancy Loper of Tyler; as well as four nephews and 3 nieces. John Oakley liked to make memories, such as taking his grandsons to every game of the last season southwest conference, no matter what the weather. Cooking sausages on the ashes of the Aggie Bonfire early in the morning cannot be forgotten. Christmas was a magical time as family gathered for the annual John Childs scavenger hunt. This came complete with clues created by Pops and placed goodness knows where. Our responsibility was to solve the clues and find the treasure. You can imagine the chaos! John, Johnny, Dukie, Dad, Uncle John, Pops, One O'clock John, no matter how you knew him he was never boring!! Heaven got a good one. In lieu of flowers the family would greatly appreciate any memorial to The Hospice of East Texas Foundation, 4111 University Blvd., Tyler, Texas 75707 or Green Acres Baptist Church Foundation, 1607 Troup Hwy, Tyler, Texas 75701. Gig Em!

John Oakley Childs of Tyler went to be with his savior on August 18, 2020 in the comfort of his home surrounded by his family. A memorial service will be held Thursday, August 20, 2020 at 2:00 p.m. in the Green Acres Baptist Church Chapel,... View Obituary & Service Information

The family of John Oakley Childs created this Life Tributes page to make it easy to share your memories.

John Oakley Childs of Tyler went to be with his savior on August...

Send flowers to the Childs family.