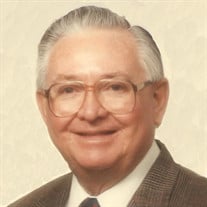 John Walton Moran graduated into the Eternal Life with Christ on September 20, 2021. A rosary will be said at 10:30 a.m. on Friday, October 1, 2021 at St. Mary Magdalene Church in Flint, TX, followed by a requiem Mass at 11:00 a.m. in the same location. A Celebration of Life will be held after the service at the Meadow Lake Senior Living Community in the 2nd floor dining room in Tyler, Texas. John was born to Patrick William Moran and Mary Eleanor Walton Moran in Olivia, Minnesota. He grew up in a small-town atmosphere, in a happy family setting, with an older sister, and a younger sister. He graduated from Olivia High School in 1946 and went on to St. Thomas College for two years before transferring to the University of Minnesota to study Engineering. During that period of time, he joined the Minnesota National Guard and participated in drills and summer camps. The Korean war had just started, and John had the opportunity to enlist in the Naval Aviation Training program, which he did, getting an Honorable discharge from the National Guard. John’s aviation training was conducted in Pensacola, Florida and Hutchinson, Kansas. He received his Commission as a Naval Officer and his Pilot’s wings on December 24, 1952. He was assigned to VP-10, on the East Coast, at Brunswick, ME. The Squadron's mission was to search and hunt down Russian submarines. John’s service tours took him to Iceland, Africa, the Mediterranean area, Malt, Italy and much of North Africa, as well as along the Eastern Coast of the United States. John was Honorably Discharged into the Reserves on July 6, 1956, and went into civilian life, working for a manufacturing company in St Paul, MN. It was then that John met his God-Given soulmate Ann Rose Black of Port Arthur, Canada. Four weeks before their intended wedding, he was recalled into the Navy during the Cuban Crisis, and almost missed his wedding, but he did make the date of December 30th, 1961. Their Honeymoon consisted of driving from Port Arthur, Canada, to Brooklyn, New York for duty During that tour, John was promoted to Commander and also Aircraft Commander that involved responsibility for his aircraft, and the fourteen-man crew. After discharge from that recall, John went back to his old job, and he and Ann started a family. Three boys and a girl were gifted to them. In 1972 the family was moved to Waco, Texas, where John coordinated moving three companies to Waco, forming what was named Marathon Battery Company. It is now known as Marathon Norcor Inc due to accumulation of several smaller companies. He retired in 1996 as the Director of Quality Engineering. During his civilian life, John was involved in service groups, namely, the Daedaleons, AUSN, American Legion, MOAA, and the NROS, all of which were service-connected organizations. Later after retirement from civilian life, he was very active in the Providence Hospital organization, becoming one of the Board of Trustees, on which he served for six years. After that John was very active in the Providence Volunteers, serving on the governing board. John was a founding member of St. Jerome Catholic Church and was on the committee that organized the columbarium, which is adjacent to the Church, and a wonderful place to meditate and pray for your loved ones, who have been cremated. One of his assignments through the church was to join a committee to form what was named: "The Institute for Learning in Retirement." It was under the guidance of the Personnel Dept of Baylor University, and John and the Director of Personnel organized the format for the program. John was the first President, and the organization is still vibrant but under a new name. He was also an avid golfer until the age of 83, when it was no longer enjoyable. John was preceded in death by his parents, his sister Margaret and her husband George Halliday, his sister Colleen Hansen, and many other close relatives and friends including his lifelong best friend, Russell F. Baker. Left to celebrate his memory are his loving wife Ann, brother-in-law Mike Hansen of Paynesville MN, son Sean Moran, MD and wife Linda of Lufkin, TX, daughter Lisa Moran, Esq. of Tyler TX, son Mark Moran, Esq. and wife Katrina of Dallas TX, and son Brett Moran, MD and wife Arlene Betancourt, MD of Dallas TX. He also leaves some special friends, Don and MaryAnn Parks, and Lorna Baker. He regretfully leaves six grandchildren: Cole and Elle Moran of Tyler TX, Kylee and Kenzee Burton of Lufkin TX, Aidan and Jessica Moran of Dallas TX, all of whom he loved dearly. In lieu of flowers, donations may be made to St Mary Magdalene Catholic Church of Flint TX, 18221 FM 2493, Flint, TX 75762, or the Waco TX Providence Foundation, 6901 Medical Pkwy, Waco, TX 76712 or the charity of your choice.

The family of John Walton Moran created this Life Tributes page to make it easy to share your memories.

John Walton Moran graduated into the Eternal Life with Christ...