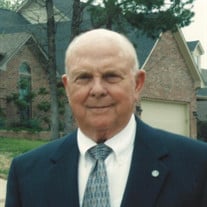 John Edward Robertson Sr., 85, of Tyler passed away on Tuesday, March 16, 2021. Mr. Robertson was born November 17, 1935 in Shreveport, LA to Edward Dudley Robertson and Lillian Evans Robertson. From a young age, he fought for those he loved and the things he believed in. He was a fierce protector and he loved the Lord. John graduated from Winnsboro High School in Winnsboro, TX in 1955. He continued his education with a B.S. from East Texas State College in 1963 and a M.S. from East Texas State University in 1966. Mr. Robertson was a member of the Army National Guard for 8 years. He worked as a Research Chemist for American Petrofina for 16 years in Mount Pleasant, TX. He was also a teacher and coach in Euless-Bedford, TX, Mount Vernon, TX and Dallas, TX. John was a member of Green Acres Baptist Church in Tyler, TX. He was also a 50-year Mason and belonged to Tyler Masonic Lodge #1231. John is survived by his loving family – wife of 55 years Betty (Bell), son John, Jr (Dedra) of Mount Vernon, son Casey (Amy) of Aurora, Illinois; grandchildren Monica of Point, TX, Jackson and Nolan of Aurora, IL; great-grandchildren Hagen and Jayden Walls of Point, TX; sister Peggy (Hamzeh) of Longwood, FL and brother James of Hurst, TX. Visitation is scheduled for 2pm-4pm Sunday, March 21, 2021 at Stewart Family Funeral Home, 7525 Old Jacksonville Highway in Tyler. A graveside service will be held on Monday, March 22, 2021 at 2pm at Pleasant Grove Memorial Park in Winnsboro, TX under the direction of Stewart Family Funeral Home. In lieu of flowers, the family is asking that donations be made to either The Hospice of East Texas Foundation, 4111 University Blvd., Tyler, TX 75701 or any charity of your choice in John’s name.

John Edward Robertson Sr., 85, of Tyler passed away on Tuesday, March 16, 2021. Mr. Robertson was born November 17, 1935 in Shreveport, LA to Edward Dudley Robertson and Lillian Evans Robertson. From a young age, he fought for those he loved... View Obituary & Service Information

The family of John Edward Robertson Sr. created this Life Tributes page to make it easy to share your memories.

John Edward Robertson Sr., 85, of Tyler passed away on Tuesday,...

Send flowers to the Robertson family.