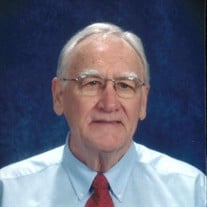 Johnny Johnston passed away in his home with his family by his side March 15, 2022. He was a loving husband, father, "Poppa" and friend. Johnny was born to the late Alton and Verna Johnston in Troup, Texas. The family moved to Jacksonville during his adolescence where he became a star basketball player. He led the Indians to the 1956 State Championship and was named MVP. After graduation he attended Tyler Jr. College, where he met his wife, Mary, of 63 years. While there he was named All American, and in 2001 inducted into the Apache Ring of Honor. Following his stellar career at TJC, he was recruited by Lamar University in Beaumont, Texas to continue playing the sport he loved. Again, he had an outstanding career that led him to being named to the Cardinal Hall of Fame. He earned a degree in Business and Education. Johnny's professional career as a teacher/coach began in Kountze, Texas. He then moved to Huntington and on to Nacogdoches. While in Nacogdoches, he became the high school principal. Following 16 years of dedication to Nacogdoches High School, Johnny was named Superintendent at Chapel Hill Independent School District. He retired with 35 years of service in public education where he impacted many lives. A few years after retirement, he returned to his passion for teaching and coaching at All Saints Episcopal School in Tyler. Johnny is survived by his loving family, including wife Mary; daughter, Micki Johnston Scoggins; son, Alan Johnston and wife, Leann; son, Kyle Johnston, all of Tyler. Three grandchildren; Kennedy and husband, Andrew May of Tyler; Rachel Johnston of Dallas; Caleb Johnston of Houston. Three great grandchildren; Parker, Preston, and Claire May, all of Tyler. Sister, Maxine Robertson of Jacksonville; countless nieces and nephews. He is preceded in death by parents Alton and Verna Johnston of Jacksonville; brother, Alton Johnston of Ft Necessity, Louisiana; brother, Delbert Johnston of Nacogdoches; sister, Sue Wallace of Frankston. Additionally, sincere gratitude goes to Sandra and Donna of Hospice Plus for their care and friendship. Graveside services are scheduled for 2:00 pm on March 17, 2022 at Bullard Community Cemetery, under the direction of Stewart Family Funeral Home, with Dr. David O. Dykes officiating. A reception for family and friends will follow graveside services at Stewart Family Funeral Home from 4:00 - 6:00 pm. Pallbearers will be Caleb Johnston, Andrew May, Charlie Johnston, Kevin Johnston, Larry Robertson, Ronnie Lucas, Ray Fore and Tyle Fore. The family requests memorials be made to the Alzheimer's Alliance of Smith County (www.alzalliance.org ) 211 Winchester Dr., Tyler, TX 75701 or the TJC Foundation (www.tjc.edu/foundation) P.O. Box 9020, Tyler, TX 75711-9020.

Johnny Johnston passed away in his home with his family by his side March 15, 2022. He was a loving husband, father, "Poppa" and friend. Johnny was born to the late Alton and Verna Johnston in Troup, Texas. The family moved to Jacksonville... View Obituary & Service Information

The family of Johnny Ray Johnston created this Life Tributes page to make it easy to share your memories.

Johnny Johnston passed away in his home with his family by his...

Send flowers to the Johnston family.