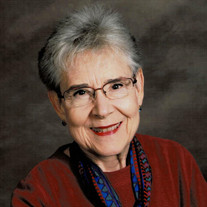 Services for Judith "Judy" Lynne Anders, 78, of Tyler will be held on Saturday, September 19, 2020 at 10:00 a.m. at Glenwood Church of Christ with Jerry Frazier officiating. Burial will be held at 1:30 p.m. at Pleasant Hill Cemetery, Pritchett, Texas under the direction of Stewart Family Funeral Home. Mrs. Anders was born on March 19, 1942, in Dallas, Texas, to parents, Sam Park and Camille Jay Snow. She was the oldest of four siblings. She peacefully passed from this life on the morning of September 13, 2020. Judy began attending Abilene Christian College in 1960, where she met and married Dan Anders in 1963, who was a Church of Christ minister. Over their years together, Dan served as minister for six congregations. Soon after marriage, they moved to Stephenville, Texas, where her husband began working as a pulpit minister. In 1965, they moved to El Monte, California and there they had two daughters, Leigh Ann and Lara. They returned to Texas in 1969 for a ministry at Central Church of Christ in Houston. Judy was involved in all things that came with being a “preacher’s wife” and she was a great complement to Dan. Judy was a full-time homemaker, though occasionally working part-time performing secretarial duties until her children were grown. In 1985, the family moved again to Malibu, California, when Dan became the minister for the Pepperdine University campus church. Judy then began working full-time and worked for 13 years at Pepperdine as office support staff, with most of those years spent working in the Religion Division. Judy and Dan semi-retired and moved to Tyler, Texas in 1998, where Dan worked for a few months as assistant minister at Glenwood Church of Christ. Although Judy lost her husband in 1999, she never lost her zest for life. Her mother, Camille moved in with her in 2001 and they were housemates until Camille’s death at the age of 101 in 2014. Her daughter, Lara then lived with her and was her roommate and companion until her death. Judy will be remembered for her deep faith and love and devotion to the Lord Jesus Christ, her love of family, her generous spirit, and her many talents including cooking, hosting parties and family gatherings, gardening, sewing and her great organizational and business sense in managing family matters and finances. She was always a calming force in a chaotic world. She was preceded in death by her parents; her husband, Dan Anders; sister, Faye Dell Ingram; and sister-in-law, Sandra Nash. Surviving family members include her daughter, Leigh Ann Anders and husband Dennis Adams of Las Vegas, NV; daughter, Lara Anders of Tyler; brother, Sam Snow II and wife Dianna of Cedar Park, TX; sister, Karen Helms and husband Carl of Englewood, CO; nephew, Kenneth Snow and wife Rhonda of Houston; niece, Kara Vesperman and husband George of Cedar Park, TX; nephew, Nicholas Helms of Centennial, CO; nephew, Timothy Ingram and wife Rachel of Flower Mound, TX; and niece, Amanda Henderson and husband Taber of Longmont, CO. Visitation is scheduled from 9:00 to 10:00 a.m. on Saturday, September 19, 2020 at Glenwood Church of Christ, 5210 Hollytree Dr. in Tyler. If desired, memorials may be made to Glenwood Church of Christ, 5210 Hollytree Dr., Tyler, TX 75703; Christian Homes and Family Services, 5476 Hollytree Dr., Tyler, TX 75703; or PATH (People Attempting To Help), 402 W. Front St., Tyler, TX 75702.

Services for Judith "Judy" Lynne Anders, 78, of Tyler will be held on Saturday, September 19, 2020 at 10:00 a.m. at Glenwood Church of Christ with Jerry Frazier officiating. Burial will be held at 1:30 p.m. at Pleasant Hill Cemetery, Pritchett,... View Obituary & Service Information

The family of Judith Lynne Anders created this Life Tributes page to make it easy to share your memories.

Services for Judith &quot;Judy&quot; Lynne Anders, 78, of Tyler will be...

Send flowers to the Anders family.