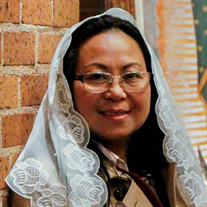 Obituary for Julia Bancud McDermott Memorial services for Julia Bancud McDermott, 60, of Tyler will be held on Tuesday, November 10, 2020, at 10 a.m. at Stewart Family Funeral Home with The Very Reverend Hank Lanik officiating. Services will be under the direction of Stewart Family Funeral Home. Julia, passed from this life into eternal life on Tuesday, November 3, 2020, in Tyler, Texas. Julia was born on June 7, 1960 in Philippines. She is the second eldest out of four siblings to Arsenio Callueng Bancud and Dionisia Addatu Bancud. She was raised in a rural area of Tuguegarao, Philippines. Julia promised herself that she would lift her family. She became a working student at a young age to finance school needs. She was a hardworking young girl at that time and was able to pursue studies. She became a scholar at the University of Saint Louis and continued her studies at Saint Ferdinand College. She finished with a Bachelor of Science in Commerce in 1986. She was an active student leader and always strived for excellence in her academics. She was very passionate about her works and always committed to her goals. She was a breadwinner at the age of 26 thus, she continued to support her family but her savings was not sufficient to sustain her family needs. Hence, she moved to Saudi Arabia and worked as a secretary in one of the largest companies in the country. Cupid made a bullseye when hearts tagged as she met her husband, Walter, in Bahrain. They were both working until they decided to move to the Philippines where they were happily married in 1996. Later on, Julia moved to the United States with her husband Walter and settled in Tyler, Texas in 2005. They were eventually joined by her son, Monchito. Julia worked for Christus Trinity Mother Frances Business Operations and with Tyler Junior College as a librarian. They both became members and devoted parishioners of the Cathedral of Immaculate Conception in Tyler. Julia was a family-oriented woman who loved traveling and spending her time with her husband, Walter and son, Monchito, also including her family back in the Philippines. She was fond of socializing with her friends. Julia made a huge impact to her family, relatives and friends. She touched so many lives. Her generosity, wit and compassion admired most. Julia was preceded in death by her husband, Walter. She is survived by her son, Monchito and his wife, Lavinia; her mother, Dionisia A. Bancud; siblings, Jacinto, Alfredo, Norma Bancud. She is also survived by her in-laws, Joseph, Martha, Mark, Maura and Stephanie McDermott; as well as nieces and nephews and countless friends.

The family of Julia Bancud McDermott created this Life Tributes page to make it easy to share your memories.

Send flowers to the McDermott family.