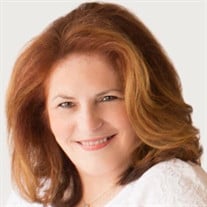 A memorial mass for Kelly Ann Wright, 56, of Tyler, will be held on Tuesday, February 2, 2021 at 2:00 p.m. at St. Mary Magdalene Catholic Church with The Very Rev. James Rowland and Father Timothy Kelly officiating under the direction of Stewart Family Funeral Home. Mrs. Wright passed away Sunday, January 24, 2021 in Tyler, with her loving husband by her side. She was born on September 6, 1964 in Manhasset, NY, the only child of Thomas and Carol Jones. Kelly grew up in Walpole, MA, a town she admired dearly. Following her graduation from Bishop Feehan High School, Kelly attended cosmetology school, something she had long dreamed of pursuing. She went on to style both hair followed by nails during her cosmetology career. Kelly met her husband James in Cape Cod, Massachusetts, while he was in the Coast Guard and the two were married for over 25 years. During their years together, the pair resided in Massachusetts, New York, and Texas. Kelly’s bright and friendly personality led her to be loved by many. In addition to being an incredible mother to her seven children, she was also a devoted “Nana” to her two grandsons. Kelly had a very close relationship with all of her children, whom she loved tremendously. She was an ongoing advocate for both Costello Syndrome and special needs. Kelly and James were avid volunteers at Bishop Gorman while their children were in school there. While James could be seen around campus making repairs, friends remember seeing Kelly’s smiling face and bubbly personality in the concession stand at home games. Kelly held the position of the beloved “nail lady” at Champu Salon in Tyler where she worked alongside some of her best friends. Over the years, Kelly grew a client and friend base whom she was very close with and held dear. She was also a member of St. Mary Magdalene Catholic Church in Flint. Kelly was preceded in death by her father, Thomas Henry Jones, and her mother-in-law, Mary Ann Wright. She is survived by her loving family including her mother, Carol Ann Jones of Walpole, Massachusetts; her beloved husband, James Wright; her seven children: Kristen, Kaila, Conor, Cassidy, Mackenzie, Samuel and Jack Wright; two grandchildren, Wyatt and Kaden; her father-in-law, Ronald John Wright of Tyler, Texas; and brother-in-law, Dr. Ronald Wright, Jr. of Dayton, Texas. Rosary will be at 5:00 p.m. and visitation will be from 5:30-7:30 p.m., on Monday, February 1, 2021 at Stewart Family Funeral Home, 7525 Old Jacksonville Highway, in Tyler. If desired, memorials may be made to the Costello Syndrome Family Network (costellosyndromeusa.com) in Kelly’s name.

A memorial mass for Kelly Ann Wright, 56, of Tyler, will be held on Tuesday, February 2, 2021 at 2:00 p.m. at St. Mary Magdalene Catholic Church with The Very Rev. James Rowland and Father Timothy Kelly officiating under the direction of Stewart... View Obituary & Service Information

The family of Kelly Ann Wright created this Life Tributes page to make it easy to share your memories.

A memorial mass for Kelly Ann Wright, 56, of Tyler, will be held...

Send flowers to the Wright family.