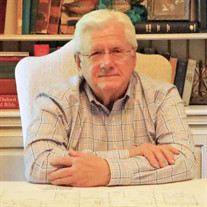 Services and burial for Kenneth Wayne Jacobe, 77, of Tyler will be held privately for the family. Mr. Jacobe passed away Sunday, August 9, 2020 in Tyler. He was born November 23, 1942 in Fort Bend County to John Vernon Jacobe and Roxie Schonert Jacobe. Kenneth was one of the original founding members of Tyler Gospel Chapel, where he remained actively involved. He helped build Jacobe Brothers Construction, Ltd., a third-generation commercial general contracting firm currently celebrating its 75th year of continuous operation, where he held the position of Chief Executive Officer. Kenneth was preceded in death by his parents, John and Roxie Jacobe; brother, Leroy Jacobe; sister, Johnnie Mae Jackson; and son, Wesley Keith Jacobe. He is survived by his loving family including his wife of 58 years, Ouida; son, Bryan and daughter-in-law Kimberly; grandsons, Zachary Jacobe, Wesley Blalock and wife Erin, Hunter Blalock and wife Stephanie; and great-grandchildren, Avery, Camdyn, Elliott, Blaine and Ryan Blalock. Pallbearers will be Steve Stone, Raul Rivas, Matthew Trimble, Randy Stevenson, Howard Honeycutt and Elden Dyer. Honorary pallbearers will be Regnol Hudson, Bobby Yancy and Jimmy Jacobe. Ken was a man that lived life with few regrets. He often shared with people how blessed he was to work side-by-side with his two sons in business. When Keith was taken from this world prematurely, a part of Ken’s heart left too, but not even losing his youngest son, caused him to waiver in his faith and commitment to serving God. As a young man in the Navy, Ken was home in Tyler on a short leave from active duty when he met the love his life, Ouida Fay McIver. After a short courtship, the two got married in 1962 in Tyler. On August 4, 2020, five days before Ken’s passing, their 58th anniversary was celebrated. By 1966, Ken and Ouida had given birth to 2 sons, a year and a half apart, and they embarked on their new life together as a young family. Hunting, fishing and camping excursions together were regular events. While an unbreakable bond as a family was established, they always knew that being a servant to the church and to God’s people would be at the forefront of their lives. Ken and his family attended the first church service of World Missionary Temple (later Tyler Gospel Chapel) in 1973, in Tyler. He worked tirelessly from that day helping build and establish the church alongside the Pastors. He taught his family by example to not just attend church but to be a part of the church and take an active role. Colossians 3:23 “And whatsoever ye do, do heartily, as to the Lord, and not unto men.” Ken’s faithfulness and commitment to God’s work allowed his ministry to grow. Planning, designing and constructing many churches throughout the United States, his passion for helping build God’s kingdom grew exponentially. Ken made his first trip to Haiti in 1973 and his love for the Haitian people blossomed. The great earthquake of 2010 in Haiti began a new era of Ken’s work in Haiti. A solicitation for help from Rev. Lyonel Joseph and Rev. Preval Meritil to Pastor John Kennedy, led Ken and fellow minister David Angelo to Haiti to make assessments of the damage to several church facilities, only 2 weeks after the earthquake. After much prayer, endless hard work, and the generosity of many donors and volunteers, Ken planned, designed organized and constructed a new 25,000 square-foot church, medical clinic and school facility. Many other projects have been successfully completed in the last 10 years, and many more are currently in various phases of planning and construction. Ken’s passion, love and dedication to anyone that he knew or worked closely with, was undeniable. In lieu of flowers, the family is accepting donations for the Haiti mission work that Ken was involved with. Checks can be mailed to: Rebuilding Haiti Together, 10195 State Hwy. 31 East, Tyler, TX 75705.

Services and burial for Kenneth Wayne Jacobe, 77, of Tyler will be held privately for the family. Mr. Jacobe passed away Sunday, August 9, 2020 in Tyler. He was born November 23, 1942 in Fort Bend County to John Vernon Jacobe and Roxie Schonert... View Obituary & Service Information

The family of Kenneth Wayne Jacobe created this Life Tributes page to make it easy to share your memories.

Services and burial for Kenneth Wayne Jacobe, 77, of Tyler will...

Send flowers to the Jacobe family.