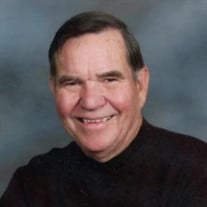 Services for Kenneth Wayne Starnes, 85, of Bullard will be held on Saturday, December 11th, at 10:00AM at Stewart Family Funeral Home with Pastor Steven R. Palmer officiating. Visitation one hour prior to service. Burial will be Harris Creek Cemetery near Winona under the direction of Stewart Family Funeral Home. Mr. Starnes passed away Tuesday, December 7, 2021, in Bullard after a lengthy illness. He was born at home February 16, 1936, in Winona, TX to Monroe Jr. and Helyn C. Fielder Starnes. Ken graduated with honors from Texas A&M University in 1971 with a degree in Industrial Engineering and started working for General Electric in Tyler, TX as a quality control engineer that same year. He retired from Trane Residential Systems in 2002. Ken met Ann Taylor at The Derrick in Tyler in 1959, and they were married the following year. Ann and Kenneth loved dancing and entertaining their extended family and friends. He loved playing 42, was a competitive bass fisherman for much of his adult life, became an avid golfer mid-life, playing into his 80’s with multiple witnessed hole-in-ones. Ken enjoyed anything fried or chocolate, country music, ice cold beer, Patsy Cline & Willie Nelson, ice cream, the Texas A&M Aggies, and the Dallas Cowboys & Mavericks. He and his wife were members of Saint Paul United Methodist Church of Tyler. Ken was preceded in death by his wife, father, mother, and older brother Rodney M. Starnes Sr. He is survived by his sons, Don W. Starnes and his wife Becky of San Antonio and David T. Starnes of Denver, CO; his sister, Dollie M. Bell; as well as his grandson US Army PVT Jordon J. Greer, and many nephews and nieces. Pallbearers will be his sons, Lisa Starnes, Jerry Whitworth, and Chris Stanbery. Honorary pallbearer will be Jordon Greer, Marshall Webb, Kenneth Webb, Marc Webb, EJ Nichols, and Preston Berg.

Services for Kenneth Wayne Starnes, 85, of Bullard will be held on Saturday, December 11th, at 10:00AM at Stewart Family Funeral Home with Pastor Steven R. Palmer officiating. Visitation one hour prior to service. Burial will be Harris Creek... View Obituary & Service Information

The family of Kenneth Wayne Starnes created this Life Tributes page to make it easy to share your memories.

Services for Kenneth Wayne Starnes, 85, of Bullard will be held...

Send flowers to the Starnes family.