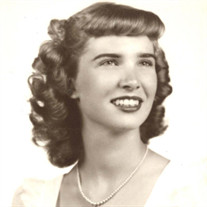 A graveside service for Lanelle Andrews Barfield, 91, of Tyler will be held on Thursday, March 11, 2021 at 2:00 p.m. at Rose Hill Cemetery in Tyler with Bro. Robert Carter officiating under the direction of Stewart Family Funeral Home. Mrs. Barfield passed away peacefully at her home Sunday, March 7, 2021 surrounded by her family. She was born May 12, 1929 in Dallas to Johnnie Bell Rice and Wylie Jack Andrews. She grew up in Dallas and then attended Baylor University and graduated with a B.A. in education. While at Baylor, she met her husband, Donald F. Barfield. They were married in Dallas in 1950. They moved to Tyler in 1954 and had 4 children. Lanelle loved her community and friends. She was a member of Colonial Hills Baptist Church where she served in many capacities but especially loved her Sunday School class. She also was a member of East Texas Association of Petroleum Landman’s Wives. Lanelle was a school teacher for over 25 years. She earned a masters in Early Childhood Education and spent the majority of her teaching years at Jones Elementary in Tyler. Lanelle was a devoted wife, mother and grandmother. She loved her family dearly and was very passionate about being the best Mema to her 11 grandchildren. She was also known for her love of animals, especially her dogs. Lanelle is preceded in death by her parents and husband of 46 years. She is survived by son Jerry Barfield and wife Susan of Tyler; daughter Janet Hardage and husband Marc of Wylie, Texas; son Terry Barfield and wife Lara of Tyler; and daughter Julie Tomlinson and husband Freddie of Tyler; 11 grandchildren and 15 great-grandchildren. Pallbearers will be her grandsons, Seth Hardage, Tyler Hardage, Colt Hardage, Andrew Barfield, Jonathon Barfield, Michael Barfield, and grandson-in-laws Ryan Davis and Kye Heck. The Barfield family would like express their thanks to Lanelle’s caregivers, Sophia Sheppard and Dena Ashley. If desired, Memorials may be made to The Hospice of East Texas Foundation, 4111 University Blvd., Tyler, TX 75701 or SPCA, P. O. Box 132899, Tyler, TX 75713.

A graveside service for Lanelle Andrews Barfield, 91, of Tyler will be held on Thursday, March 11, 2021 at 2:00 p.m. at Rose Hill Cemetery in Tyler with Bro. Robert Carter officiating under the direction of Stewart Family Funeral Home. Mrs.... View Obituary & Service Information

The family of Lanelle Andrews Barfield created this Life Tributes page to make it easy to share your memories.

A graveside service for Lanelle Andrews Barfield, 91, of Tyler...

Send flowers to the Barfield family.