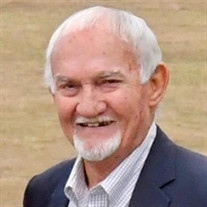 Larry Gene Harwood, 78, died late Friday at his home on Old Lake Tyler, surrounded by family following an extended illness. Larry was born to Bill and Idabelle Wilson Harwood in Tyler on January 14th, 1942. Larry grew up as a Baptist boy in New London, Texas, graduating from London High School in 1960. Being recruited by legendary Coach Floyd Wagstaff to play football at Tyler Junior College, he was a member of the TJC team that played in the Junior Rose Ball Game in 1960 and was voted as National Junior College All American in 1961. He transferred to Southern Methodist University and ultimately earned a BBA Degree from Sam Houston State University. Most recently, Larry was named as an inductee into the TJC Sports Circle of Honor. As a young boy, he followed his father around the East Texas Oil Field, learning to love, admire and appreciate the “oil patch” people, their mentality, and their way of life. In 1973 he founded a very successful company known as Oilfield Sales of Houston, specializing in selling oil-gas equipment, drilling rigs, and drill stem pipe, which he operated until retirement. For the past several years, Larry shared dual residences at Old Lake Tyler and Caddo Lake in Uncertain, Texas. Larry loved God, his family, his friends, fast cars, fast boats, fancy-expensive trucks, NASCAR, football, and any possible opportunity to party while entertaining family and friends with fish fries, barbeques, and dove hunts. He was an avid and faithful participant in the Hackberry Rod and Gun Club fishing tournaments with friends for many years. Numerous friends were quoted as saying, “Thank you God for only making one Larry Harwood”. “They threw away the mold when they made Larry Harwood.” “Larry was truly a very loving, generous, caring, one-of-a-kind type of guy who would literally give you the shirt off his back if you needed it, and if he liked you.” “He was too good for his own good and generous to a fault.” Many individuals throughout Texas have received monetary aid from Larry and have never known their benefactor. Larry was quite a character….a fun-loving character…a true character….but forever a good character. He was predeceased by his parents and his brother-in-law, Dr. Steve Wilson of Tyler. He is survived by his loving and dedicated sister, Charlotte Wilson of Tyler; two nieces, Stephanie (David) Cotton of Puerto Rico, Wendy (Jay) Roten of San Antonio; and great-nieces and nephews, Carlie Cotton, Ainsley Cotton, Rylan Roten, Parker Roten, and Blakely Roten. Memorial services will be held at 10:00 AM Wednesday, September 16th at Stewart Family Funeral Home, 7525 Old Jacksonville Hwy, Tyler, Texas 75703, officiated by Dr. Bruce Cox. A reception and visitation will follow in the Stewart Hospitality Room. Honorary pallbearers will be Darrell Taliaferro, Jeff Bigbie, Billy Vernon, Don White, Kenneth Stephenson, Ronnie Stevens, Rex Stevens, and Freddie Phillips. Memorials may be made to The Hospice of East Texas Foundation, 4111 University Blvd, Tyler, Texas 75701, or a charity of your choice.

Larry Gene Harwood, 78, died late Friday at his home on Old Lake Tyler, surrounded by family following an extended illness. Larry was born to Bill and Idabelle Wilson Harwood in Tyler on January 14th, 1942. Larry grew up as a Baptist boy in... View Obituary & Service Information

The family of Larry Harwood created this Life Tributes page to make it easy to share your memories.

Send flowers to the Harwood family.