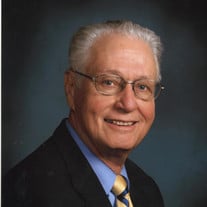 Memorial services for Lawrence “Larry” Herbert Krumm, Jr., 87, of Tyler, will be Friday, June 24, 2022 at 10:00 a.m. at Trinity Lutheran Church under the direction of Stewart Family Funeral Home. Interment will follow at Rose Hill Cemetery in Tyler. Visitation will be Thursday, June 23, 2022 from 6-8 p.m. at Stewart Family Funeral Home, 7525 Old Jacksonville Hwy, Tyler, Texas 75701. Larry Krumm was born on April 1, 1935 in Adair, Iowa. He was a gift of God to his parents, Lawrence H. and Arvilla Mae Krumm. Shortly afterward, Larry was born again as a chosen and redeemed child of God in Holy Baptism. As a young teen, he was instructed in the Christian faith and publically confirmed the covenant of Holy Baptism on April 10, 1949. The promises he made to trust in and follow Jesus were kept his entire life! Larry and his parents moved to Tyler in 1951, where he attended John Tyler High School and met his first love, Mary Ann Gableman. They moved to Sherman, Texas in 1954. Larry and Mary Ann started their family in 1958 and were blessed with three sons. He always put his family first. He loved them fiercely and took pride in providing for them. Upon returning to Tyler in 1977, Larry became a disciple of Jesus at Trinity Lutheran Church. He sang in the choir, served on the Board of Elders, as an officer of the Early Childhood Ministry Board, on various Call Committees, and as a founding member and first leader of the NOAH small group for many years. He was also active in Trinity’s Prime Timers organization and as the Master of Ceremony for the annual nursing homes residents’ picnics. He was an avid golfer and fisherman. He enjoyed pheasant hunting, square dancing, line dancing and traveling with Ann in their motor home. Larry also made time to serve in the community with the Jaycees and the Chamber of Commerce. After Mary Ann was called home to heaven, Larry married his second love, Ann. Married for 15 years, they continued to live in Tyler where they loved being with their grandchildren. He will always be remembered as never meeting a stranger, welcoming people in church, as the greatest Dad and Grandpa, a loving husband and for having a true servant’s heart. Even when his health had failed and he wasn’t able to continue living at home, he never complained. Nor did he ever ask to be taken back home. He just powered through it. Ann respected Larry as a wonderful husband and can’t remember them ever having a true fight. Larry was preceded in death by his parents, his first wife, Mary Ann, and oldest son, Lawrence “Bud” Krumm III. Among those who remain to grieve his death, yet to rejoice in Larry’s eternal life in heaven include his wife of 15 years, Ann Rose Krumm of Tyler; sons, Scott Allen Krumm and wife, Lisa of Tyler, Steven Martin Krumm and wife, Tara of Livingston, Montana; and Lauri Krumm, wife of Lawrence “Bud” Krumm III; Ann’s son, Randy Wade and wife, Sherril; one brother, Bill Krumm and wife, Carol Ann; grandchildren, Lawrence H. Krumm IV, Matthew Krumm and wife, Katy, Ann Herbert and husband, Joe, Lyndsey Rhode and husband, Mitchel, Zachary Krumm, Blake Krumm, Jocelyn Whitehead and husband, Justin, Kyle Doering and wife, Brittany, Van Mahoney, Tobi Sparks, Stephen Rodgers and wife, Sabrina, BreAnn Rodgers, Tyler Wade and wife, Ashley, twenty-one great grandchildren and numerous nieces and nephews. Larry was graced by God to live 87 years, 2 months and 19 days. His earthly body will be lovingly laid to rest in Tyler’s Rose Hill cemetery on June 24, 2022, there to await the return of his Savior, Jesus, and the resurrection of all mankind. Those humbly serving as pallbearers will be Matthew Krumm, Zachary Krumm, Blake Krumm, Lawrence H. Krumm IV, Stephen Rodgers and Jason Krumm. Honorary pallbearers will be BreAnn Rodgers, Kyle Doering and Van Mahoney. This is the earthly record of Larry H. Krumm, Jr. The heavenly record now reads: “Blessed are they who die in the Lord, that they may rest from their labor.” “The blood of Jesus Christ cleanses us from all sin.”

The family of Larry Krumm created this Life Tributes page to make it easy to share your memories.

Send flowers to the Krumm family.