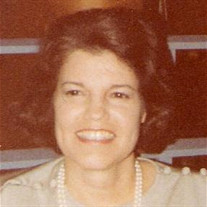 Services for Laura Rogers Turner, 91, will be held Tuesday, January 21, 2020 at 2:00 p.m. in the Stewart Family Funeral Home Chapel in Tyler, Texas with the Reverend Dr. Stuart Baskin officiating. Mrs. Turner passed away January 17, 2020 in Tyler. She was born in Luverne, Alabama on September 4, 1928 to William Thompson Rogers, Jr. and Margaret Dobbs Rogers. She attended Judson College and the University of Alabama where she received her degree in Music (classical piano). During this time, Laura was also named as the Crenshaw County “Maid of Cotton,” a title her family loved (and teased her about) because it seemed to epitomize her very genuine persona of the true Southern lady – who could also be a Steel Magnolia. She also earned a master’s degree in Liberal Arts from SMU. She met her husband, John C. Turner, Jr., M.D. while at the University of Alabama. She enjoyed teaching school and did so for several years before her marriage. John and Laura married in 1952 and moved to Rochester, Minnesota for John’s surgical residency at Mayo Clinic. They had two children in Minnesota before moving to Tyler, where their third child was born. Laura volunteered with her church and many organizations during her lifetime. However, Laura’s greatest joy in life was her family. She was a loving and devoted wife and caregiver, mother, grandmother, great-grandmother, and friend. She got strength and comfort from her relationship with Jesus Christ during life’s many difficulties. Laura was preceded in death by her husband; her brother, William T. Rogers III; and two nephews, Mark Randall Rogers and William T. Rogers IV. She is survived by her children, Jay and Donna Turner, Leslie Turner and Chuck Sauer, and Lisa Turner; her grandson, Richard Rippamonti and his wife Rachel; and her granddaughter, Rachel Major and her husband, Patrick. Laura’s great-grandchildren, Nolan and Hannah Major, added tremendous joy to her final years. Laura is also survived by her sister-in-law, Margaret Tompkins Rogers, her nieces and nephews, John Rogers, Marc Rogers, Laura Smoot, and Tracy Wiley; and her cousin, Earle F. Wilson, Jr. The family would like to thank the residents and employees of Meadow Lake Assisted Living and Meadow Lake Skilled Nursing for their friendship and care of our mother. Pallbearers are Lee Lasater, Craig Pool, Gene Cuvelier, Jon Tate, Richard Rippamonti and Patrick Major. Honorary pallbearers are Dr. William C. Smyth, Dr. John Hudnall, John Hills, and Allen Burt. Memorial contributions may be made to Sight.org 7922 S. Broadway Avenue Tyler, Texas 75703 or the charity of your choice.

The family of Laura Rogers Turner created this Life Tributes page to make it easy to share your memories.

Services for Laura Rogers Turner, 91, will be held Tuesday, January...

Send flowers to the Turner family.