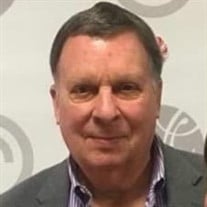 A memorial service for Leonard Leifer, 73, of Tyler will be held on Monday, November 9, 2020 at 11:00 a.m. at Marvin United Methodist Church with Dr. Doug Baker officiating. Reception with the family will follow afterward in the courtyard. Leonard Leifer passed away peacefully on Tuesday in Grapevine, Texas after a hard-fought battle with heart disease. His wife and three children were able to be by his side. Mr. Leifer was born March 3, 1947 in Tyler, Texas to Adeline Leifer. Leonard was a lifelong Tylerite graduating from Robert E. Lee High School. He attended Tyler Jr. College. He was a member of Marvin United Methodist Church for over 35 years. Leonard was a proud veteran, having served in the U.S. Army. He retired after 40 years as owner and operator of Crow Towing. He was a Mason and a Shriner for many years. Leonard loved Tyler and was a member and supporter of the Order of the Rose and in his later years a volunteer for the Tyler Police Department. He loved traveling and going to the “5G” deer lease and, of course, socializing with his many friends and neighbors. Most of all Leonard loved and cared for his family with all of his heart. He was preceded in death by his mother, Adeline Leifer; his mother-in-law, Ellen Ellett; his father-in-law, James “Sonny” Ellett; and his nephew, Wayne Kesecker. Leonard is survived by his loving family including his wife of 51 years, Claire Leifer; his three children: daughter, Lori Boatwright, son, Cody Leifer and wife Leah, and daughter, Libby Leifer. He is also survived by his two granddaughters, Lily Leifer and Cecilia Leifer; and his grandson, Mason Ferguson; brother, Mark Leifer; sister-in-law, Sue Green; brother-in-law, Jamie Ellett; nephew, Ty Green and wife Jordan; as well as countless friends. Leonard will be missed by so many, but we thank God for his life and our many precious memories of him. If desired, memorials may be made in Leonard’s honor to Marvin United Methodist Church, 300 W. Erwin, Tyler, TX 75702 or Shriners Hospital for Children, Houston Donor Development Office, 6977 Main St., Houston, TX 77030, www.shrinershospitalsforchildren.org. "Those who hope in the Lord will renew their strength. They will soar on wings like eagles; they will run and not grow weary. They will walk and not be faint." Isaiah 40.31

A memorial service for Leonard Leifer, 73, of Tyler will be held on Monday, November 9, 2020 at 11:00 a.m. at Marvin United Methodist Church with Dr. Doug Baker officiating. Reception with the family will follow afterward in the courtyard. Leonard... View Obituary & Service Information

The family of Leonard Leifer created this Life Tributes page to make it easy to share your memories.

A memorial service for Leonard Leifer, 73, of Tyler will be held...

Send flowers to the Leifer family.