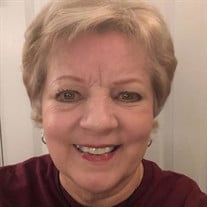 Services for Linda B. Bice, 74 of Magnolia, Texas, will be held on Monday, August 2 at 2 p.m. at Stewart Family Funeral Home with Pastor Scott Wiley of First Baptist Church of Frankston officiating along with Mr. Tracy Crawford. Burial will follow at Cathedral In The Pines Cemetery in Tyler, Texas, under the direction of Stewart Family Funeral Home. Linda passed away Monday, July 27 at her home. She was born January 19, 1947, in Tyler, Texas, the only child of Vera Lemons Birdwell and William Ward Birdwell of Troup, Texas. She moved to Tyler with her mother in 1960 after the death of her father. She was a member of First Baptist Church and a 1965 graduate of Robert E. Lee High School and attended Tyler Junior College. Linda married Austeen “Chuck” Bice Jr. in September or 1966, and they lived in Nacogdoches while Chuck attended and graduated from Stephen F. Austin State University. While living in Nacogdoches, Linda worked as department secretary for the S.F.A. English Department. She was the great niece of Dr. A.W. Birdwell, the first President of Stephen F. Austin State University. Linda and Chuck relocated to Arlington, Texas, in 1969. While living in Arlington, Linda worked at LTV Aerospace (Vought Corporation) in Grand Prairie for 13 years. It was during this happy time that their daughter, Holli, was born. Chuck and Linda made numerous close friends over the years and shared many fun vacations together. Returning to East Texas in 1984, Chuck and Linda built their home at Lake Palestine. Linda worked as the Administrative Secretary at East Texas Medical Center, Tyler, Texas, from 1984 to her early retirement in 2002. Chuck and Linda were members of Green Acres Baptist Church in Tyler, and later became members of First Baptist Church of Frankston. After relocating to Magnolia, Texas, they became members of the First Baptist Church in Magnolia. Linda loved writing poetry and had authored approximately 35 poems throughout the years and had won several awards for her works. She also liked flower gardening, fishing, and traveling with her husband, family, and friends. She enjoyed trips to Europe, especially Paris, Alaska, Hawaii and to Yellowstone, Yosemite, and the Smoky Mountain National Park. She also enjoyed the arts and had been a member of the Tyler Civic Theatre. In the last several years, she and Chuck shared an interest in owning classic cars and participating in local car shows. She also enjoyed researching her family genealogy and was able to trace her family ancestry back to their immigration from England. Linda was a proud member of the Margaret Montgomery Chapter of the Daughters of the American Revolution, and served as Chaplin for three years. Linda will be remembered as a kind-hearted woman with a gentle spirit. She loved her God, her family, and her friends. One of her favorite things was a beautiful sunset. Linda is survived by her husband and buddy of almost 55 years, Austeen “Chuck” Bice, Jr., her devoted daughter, Holli Atkinson, who she adored, her son-in-law Jerry Atkinson, and the “apple of her eye,” her grandson Grant Andrew Atkinson, all of Magnolia, Texas. She is also survived by her father-in-law, Chuck Bice Sr., and brother-in-law Matt Bice of Tyler, Texas, several relatives, and many close friends. Pallbearers will be Jerry Atkinson, Matt Bice, Ken St.Ama, Dennis Hartley, Dr. Dick Sale, and Willard Smith. Visitation is scheduled from 1 - 2 p.m. on Monday, August 2 at Stewart Family Funeral Home, 7525 Old Jacksonville Highway, in Tyler.

Services for Linda B. Bice, 74 of Magnolia, Texas, will be held on Monday, August 2 at 2 p.m. at Stewart Family Funeral Home with Pastor Scott Wiley of First Baptist Church of Frankston officiating along with Mr. Tracy Crawford. Burial will... View Obituary & Service Information

The family of Linda B. Bice created this Life Tributes page to make it easy to share your memories.

Send flowers to the Bice family.