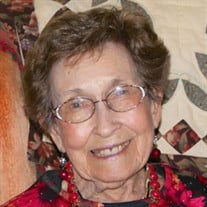 Lorene Edna Campbell Sneed Allen was born June 1, 1925 to Joseph and Frankie Campbell in Lowell, Arkansas and died Saturday, March 6, 2021 in Tyler, Texas. Lorene graduated from Birdville High School. After high school, she lived with her brother, Harry Campbell and his family, while she went to business college. She worked for Harry, who had a road construction business as the bookkeeper and would travel to Austin for job bids all over the state, mostly in West Texas. She later worked as a bookkeeper for J. H. Strain and Bailey Bridge, both road construction companies in Abilene, TX. Before she retired in 1986, she was a bookkeeper for a crude oil operator in Abilene. She married W. C. (Bud) Sneed in 1948, and they lived in Abilene from 1951 until Bud’s death in February 1986. She married Delbert W. Allen, whom she met in high school, in June 1986. She and Delbert lived in Chandler, TX on Lake Palestine until Delbert’s death in December 2006, and she continued to live in their home on Lake Palestine until her death. She was preceded in death by her parents; her husbands, Bud and Delbert; and many brothers and sisters. She is survived by her son, Phil Sneed and wife, Sally; and her stepdaughter, Janis Fetter and husband, Rick. She was also survived by her sisters, Josie Sinquefield and Veneeta Reeves and husband, Jack. She is also survived by several grandchildren, great-grandchildren, numerous nieces and nephews; and Dan and Rosemary Raynor, who so graciously gave countless hours of their time caring for her. Pallbearers will be her nephews Aaron Reeves, Joe Sinquefield, Ron Sinquefield, Chester Sinquefield, Freddie Sinquefield and Dick Chester. A celebration of her life will be Friday, March 12, 2021 at 2:00 p.m. at West Lake Baptist Church, 1439 FM 315 South, Chandler, TX with Brother Lee Evans officiating under the direction of Stewart Family Funeral Home in Tyler. Due to COVID-19, necessary social distancing will be observed and masks will be required. Graveside services will be in Abilene, TX Monday, March 15, 2021 at 2:00 p.m. at Elmwood Cemetery, 5750 US 277 S., Abilene, TX with Robert Stone officiating under the direction of Stewart Family Funeral Home. In lieu of flowers, the family requests memorials be sent to West Lake Baptist Church, 1439 FM 315 South, Chandler, TX 75758.

The family of Lorene Edna Campbell Sneed Allen created this Life Tributes page to make it easy to share your memories.

Send flowers to the Allen family.