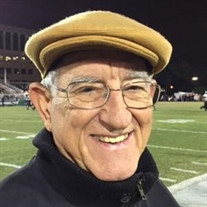 A requiem mass for Louis Eugene Chaump Sr. will be held on Saturday, January 18, 2020, at 10:00 a.m. at St. Mary Magdalene Catholic Church in Flint. Father James Rowland will officiate the requiem funeral mass. Affectionally known as “Big Lou and Papa Louie” by his family and friends, due to his oftentimes larger than life persona, Mr. Chaump passed away Sunday, January 5, 2020, in Kyle, TX. Despite his amazing zest for life and will to live, he quietly passed after battling a series of medical ailments over the last few years. He was born May 5, 1935 in Pittston, PA to Louis John Chaump and Louise Gentile Chaump. Lou grew up on a farm, excelled in academics, sports, school activities, and graduated from West Pittston High School in 1952. He attended Wilkes College and then Penn State University from which he graduated with a degree in Mechanical Engineering in 1957. His education continued beyond his undergraduate studies; he earned his Master’s degree in Engineering Science in 1970 from Penn State. Louis had a very successful career. He started with Pratt and Whitney focusing on jet engine technology and continued in engineering and management positions with General Electric, Trane, and United Technologies. While working for Pratt & Whitney in Connecticut in 1959, Louis met and married the love of his life, Judith (Judy) Anne Plikaitis, together they had and raised five children and were married for over 60 years. With GE, Louis spent many years with the company’s Aerospace Technology Group based in Philadelphia. That work included development of aerospace engines and other projects related to the defense industry and NASA’s Apollo Programs. His employment took him to many countries in Europe, Latin America and the Far East. For most of his early career and marriage, Louis resided in King of Prussia, PA before accepting a position in 1979 with Trane as Vice President of Engineering, that led Louis and his family to relocate to Tyler, Texas. After his tenure with Trane, Louis continued in executive positions in the air conditioning industry working for United Technologies, and Carrier Corporation, the nation’s largest manufacturer of air-conditioners holding leadership positions in Indianapolis, Tyler, and Syracuse. Over the course of his career, Louis was awarded multiple patents for his engineering work in the area of HVAC and variable speed compressor technology; he also mentored and coached many individuals and friends along the way. One of his happiest and most fulfilling professional achievements was being able to use his HVAC expertise to work alongside the Vatican engineering teams and other industry experts to address heat, humidity and filtration issues in the Sistine Chapel in Rome, that were damaging the priceless Michelangelo frescos. Sponsored by Carrier Corporation and others, a state-of-the art new system was eventually successfully installed. Lou finished his career with United Technologies, as a Vice President of Engineering. Lou and Judy retired to their home in Tyler, where they lived happily, along with their pup Sadie, for essentially the rest of their lives. Even in retirement, Lou was forward thinking. He loved technology and science and was a founding board member of an Austin technology start-up company called Concepture. Louis was a life-long learner and strong believer in formal education. His devotion to the Tyler Catholic School System included serving as the president of the school board, president of the TK Gorman athletics booster club, participation in numerous steering committees, and fundraising. His love of education and helping others continued throughout his life, as the Chaump family sponsored scholarships for students through the Tyler Catholic School Foundation. Lou and Judy were firm believers that an educational foundation was the key to the future of the Catholic church. Louis was also happy and proud to support his alma mater, by creating a permanently endowed scholarship for engineering students at Penn State University. Louis was a devout Catholic; he served as a Eucharistic Minister, and as an active parishioner of St. Mary Magdalene Church in Flint. He enjoyed participating in church events and was thrilled to contribute to the capital campaign to help finance the new church at St. Mary Magdalene. Louis was a member of the Knights of Columbus council 14362. He was instrumental in the founding of the Knights chapter at St. Mary Magdalene and held the positions of Chancellor, Council Trustee, and Grand Knight. He had a strong devotion to his faith and community and enjoyed giving his time and engaging in community activities. During Lent, Lou could often be found at the Friday evening K of C fish fries. He also enthusiastically volunteered at the parish food pantry. Lou embodied and lived the four core principals of the Knights of Columbus: Charity, Unity, Fraternity, and Patriotism. Lou was an avid golfer. A long-time member of Hollytree Country Club, he served as the President of Hollytree’s Member Golf Association. A highlight for him and his passion for golf included a hole in one on Hollytree’s hole number 13, which sits on the course just across from the home he and Judy built. Louis was preceded in death by his beloved wife Judy, his brother George Chaump, and sister Marie Lepore and his parents. He is survived by his brothers: Donald Chaump, of West Pittston PA, John Chaump, Levittown, PA, and sister Darlene Chaump, of Atlanta Georgia, his children: Susan Nichols (Robert) of Houston, Louis Eugene Jr. of Driftwood, Anthony of Buda, Peter (Julie) of Dallas, and Jessica (Aaron) of Austin. Big Lou is also survived by nine grandchildren, Milan Chaump, Kristin Chaump, Kaitlin Chaump, Matthew Chaump, Isabella Chaump, Danielle Chaump, Alexander Chaump, Walker Evans, Luke Evans, numerous nieces, nephews, cousins and many loving friends. Visitation is scheduled from 5:00 - 8:00 p.m. with a Rosary from 6:00 to 7:00 p.m. on Friday, January 17, 2020, at Stewart Family Funeral Home, 7525 Old Jacksonville Highway in Tyler. If desired, in lieu of flowers, memorial contributions may be made to the Tyler Catholic School Foundation, P.O. Box 131175, Tyler, Texas 75713, or to the charity of your choice.

The family of Louis Eugene Chaump Sr. created this Life Tributes page to make it easy to share your memories.

A requiem mass for Louis Eugene Chaump Sr. will be held on Saturday,...

Send flowers to the Chaump family.