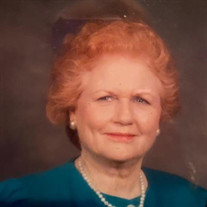 Our beloved mother, grandmother and great-grandmother, Mattie Louise Pipkins Hall, went home to be with her Savior on March 31, 2022, at the age of 96. Louise was born on March 3, 1926, in Malden, Missouri to Walter Edgar and Zora Leigh Pipkins. Louise had an older brother, James (Bill) and a younger brother, Ed, both deceased. Her father passed away of diphtheria when Louise was only 8 months old and was raised by her widowed mother. Louise enjoyed school and playing sports. She was active in high school sports, baseball, running track and basketball. She attended Walnut Grove Baptist Church and trusted Jesus as her savior at the age of 12. Once out of high school, Louise moved from her home in Kennett, Missouri to Arkansas, where she performed clerical work at Pine Bluff Arsenal. Toward the end of WWII, Louise moved to Washington D.C. for a job at the Pentagon. It was in Washington D.C. that Louise met her husband of 71 years, Everett George Hall, who was stationed at Fort Myers Army Base in Virginia. They met at a military dance and were married at Fort Myers on October 5, 1945, shortly after the end of WWII. After her husband was discharged from the Army, they moved to Champagne, Illinois. It was during this time that Louise’s first child, Scott, was born. Louise found herself moving numerous times to different states as her husband played Triple A and professional baseball, coached, and taught school for a living. Louise was a full time mother and homemaker, devoting her time and energies to making a loving home for her children. Their last move was to Tyler, Tx in approximately 1959. Louise enjoyed life and early mornings. She was devoted to her growing family and was a selfless mother of five children. She was the driving force behind raising her children to attend church and learn about Jesus. One day she and her children will all be together again because of her influence and their trust in Jesus Christ as their Savior. Louise served for years at Trinity Baptist Church teaching Mission Friends, G.A. 's and 4 and 5-year-old children in Sunday School. She always prepared a big Sunday dinner after church. After her children were raised and in later years, Louise attended Colonial Hills Baptist and Green Acres Baptist churches where she was involved in ladies’ groups and senior citizen Bible studies. She made a habit of calling people who were ill or needed help to see if there was anything she could do for them. She will be greatly missed. Louise was preceded in death by her husband, Everett. She is survived by her son, Scott Everett Hall and wife, Kathy of Lindale, Tx; daughter, Janet Louise Oberholtzer and husband, T. Kem Oberholtzer of The Woodlands, Tx; daughter, Susan Vi Calley of Whitehouse Tx; daughter, Jill Pipkins Ainsworth and husband, Kerry Ainsworth of Rockwall, Tx; and daughter, Kit Lee Stewart and husband, Billy Stewart of Lindale, Tx, her 11 grandchildren and 16 great-grandchildren. Services for Louise will be held Thursday, April 7, 2022 at 2:00 p.m. in the Stewart Family Funeral Home Chapel with Dr. Kem Oberholtzer officiating. A private burial will be at Rose Lawn Cemetery under the direction of Stewart Family Funeral Home. Visitation will be one hour prior to the service.

Our beloved mother, grandmother and great-grandmother, Mattie Louise Pipkins Hall, went home to be with her Savior on March 31, 2022, at the age of 96. Louise was born on March 3, 1926, in Malden, Missouri to Walter Edgar and Zora Leigh Pipkins.... View Obituary & Service Information

The family of Louise Pipkins Hall created this Life Tributes page to make it easy to share your memories.

Send flowers to the Hall family.