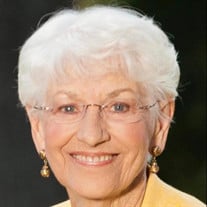 It is with heavy hearts that the family of Frances “Lucille” Carlton announces that she was called home on December 28, 2020. We mourn the loss of our matriarch: beloved mother, cherished grandmother, adored great-grandmother. Despite our grief, we rejoice in the knowledge that she has been welcomed into the loving arms of her Savior, in whom she will find everlasting peace and rest. We also delight in knowing she has at last been reunited with her loving husband of 66 years, T.C. Carlton. Lucille Carlton was born on December 7, 1925 in Cumberland, OK, to Robert Cecil (R.C.) and Edna George Duncan. She was the second of seven children. Theirs was a family of limited means, but they never wanted for anything and from an early age learned the value of hard work and perseverance. Lucille and her siblings were part of the “Greatest Generation,” having not only endured both the Great Depression and World War II, but having developed the resourcefulness and strength of character needed to survive them. When she was just 16 years old, Lucille was sent by her mother to San Diego, CA, to see her older brother, Melvin, off to war. Though only a teenager during the war years, she was committed to contributing to the war effort herself and found a position in a factory working as a “Rosie the Riveter.” Lucille married Thomas Charles (T.C.) Carlton on March 8, 1946. Together, they raised two daughters, Sherrie Kay and Vicki Lynn, moving wherever the oil business led them – oilfield towns throughout New Mexico, Oklahoma, and West Texas. T.C. and Lucille finally moved to Tyler, TX, in 1980 and they would call it home for the remainder of their lives. Having been longtime members of Sherwood Baptist Church in Odessa, they were happy to find a new church home in Green Acres Baptist Church in Tyler. At the age of 55, Lucille discovered what would turn out to be one of the great passions of her life – the game of golf. To it, she was able to apply the same determination and never-quit attitude that she had learned at an early age and that had seen her through so many of life’s challenges. The game of golf fueled her competitive spirit while allowing her quality time spent with T.C. and countless family and special friends who shared her love of the game. Lucille was the center of our family’s universe. She was intensely devoted to her daughters, granddaughters, and great-grandchildren. She remained close to her surviving siblings throughout her life as well as her many nieces and nephews. Time in her presence was filled with great stories, bouts of laughter, big hugs, and lots of love. She was the definition of graciousness and an example for us all. She will forever be in our hearts and cherished in our memories. Lucille was preceded in death by her parents, R.C. and Edna Duncan; her brothers, Melvin “Slick” Duncan and Robert Duncan; her brother-in-law, Bob Rogers; and her husband, T.C. Carlton. She is survived by her sisters, Bobbie Rogers of Weatherford, TX and Pat Hardage of Georgetown, TX; her brothers, Kenneth Duncan of Cumberland, OK, and George Duncan of Edmond, OK; her daughters, Sherrie Godwin of Whitehouse, TX, and Vicki Harris of Gig Harbor, WA; her granddaughters, Jennifer Harris of Gig Harbor, WA, Holly Conaway of Whitehouse, TX, Julie Gutierrez of Melissa, TX, Heather Wood of Frisco, TX, Hope George of Benton, LA, and Jessica Holt of Melissa, TX; and her twelve great-grandchildren. Private interment will be held at Dallas-Fort Worth National Cemetery on Thursday, January 7, 2021. Pallbearers will be Brian Conaway, Justin George, Alanzo Gutierrez, Kyle Holt, Brandon Wood, and Caeden Wood. The family would like to express our sincere appreciation for the loving care Lucille received at The Hospice of East Texas. We will always be grateful for the care provided her by the doctors, nurses, and staff there. In lieu of flowers, the family requests gifts be made in honor of her memory to The Hospice of East Texas (www.hospiceofeasttexas.org) or to the Alzheimer’s Association www.alz.org.

It is with heavy hearts that the family of Frances &#8220;Lucille&#8221; Carlton announces that she was called home on December 28, 2020. We mourn the loss of our matriarch: beloved mother, cherished grandmother, adored great-grandmother.... View Obituary & Service Information

The family of Lucille Carlton created this Life Tributes page to make it easy to share your memories.

It is with heavy hearts that the family of Frances “Lucille”...