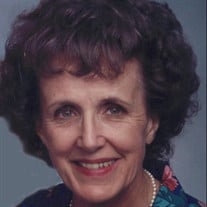 Services for Mabel McCrackin McGee, 92, of Tyler will be held Tuesday, June 8, 2021 at 2 p.m. at Stewart Family Funeral Home Chapel in Tyler with Rev. Brandy Stevens officiating. Burial will follow at Goodgame Cemetery near Athens under the direction of Stewart Family Funeral Home. Mabel McGee passed away gracefully and peacefully on June 2, 2021 at Hospice of East Texas with her children and son-in-law at her side. Mabel was born October 2, 1928 in Gainesville, Texas to Aaron L. “Mac” McCrackin and Constance Lee Wilkins McCrackin. Her family moved to Trinidad, Texas in 1935. She loved growing up in Trinidad, especially the people that made it such a wonderful community. She graduated from Trinidad High School as Valedictorian in 1946, continuing her education by graduating from Tyler Commercial College in Tyler. Mabel remained very active in the alumni association of Trinidad High School during her entire life. Mabel married Roy McGee, the love of her life on July 14, 1951, and they celebrated their 59th wedding anniversary shortly before Roy’s death in 2010. Mabel worked at Texas Power & Light, now Oncor, for over 35 years, including many years as a stenographer in the Customer Service Department. In addition she served as a reporter for TPL NEWS for most of those years. Mabel began her career in Tyler and has resided in Tyler almost all of her adult life. Mabel was an active member of the Tyler Downtowners Business & Professional Women, serving as President and being named Woman of the Year in 1983. She chaired numerous committees and was active in its service projects including ringing bells at Christmas for the Salvation Army and walking the miles for MDA. Mabel was devoted to her family and loved being involved with her children. She served as a Camp Fire Girls Leader, elementary class Room Mother and PTA member in addition to managing to attend her children’s extracurricular activities throughout their school years. Once she became a grandmother, she made special efforts to travel to attend as many of their sporting events, band, choir and theater performances, and Grandparent Days as she could manage. Mabel was an avid sports fan, faithfully following the Dallas Cowboys and Texas Rangers, as well as various collegiate sports teams. She enjoyed traveling, reading, watching the wild birds she fed and playing 42 with family and friends (and later via App). She was a long-time member of Glenwood United Methodist Church, involved in the choir, Two by Two Sunday School Class, United Methodist Women and the Missions Society. She continued involvement at Fairwood United Methodist Church after a church merger, continuing to enjoy her Sunday School class, service projects in the community, book club and UMW (Pollard chapter). Mabel was an active member of the Goodgame Cemetery Association for many years, serving as Secretary for 20 years. Part of her role included recording minutes of the meetings which provided a valuable history of the Cemetery Association. She was instrumental in efforts that resulted in the Goodgame Cemetery receiving the Texas Historical Cemetery Marker from the Texas Historical Commission in 2008. Mabel is preceded in death by her husband, her parents, her sister, Constance McCrackin Speed and brother Aaron L. “Buddie” McCrackin, Jr. She is survived by daughter and son-in-law, Becky McGee Lee and Louis N. “Buddy” Lee of Dallas; son and daughter-in-law, R. Lee McGee and Kia Eldred McGee of Pearland; grandchildren Brandon Lee and Mason Lee of Dallas and the triplets, Emma McGee of Austin, Ben McGee of Pearland and Max McGee of Pearland; sister-in-law Ruth McGee of Tyler; sister-in-law and brother-in-law Marsha McGee Kelly and Bo Kelly of Converse, Texas; and many well-loved nieces, nephews, other extended family members and close friends located throughout the continental United States and England. Pallbearers will be Hobie Fugate, Brandon Lee, Buddy Lee, Mason Lee, Kent McCrackin and Gavin McGee. Honorary pallbearers will be Jill Buysman, Lee Michelle Davey, Kitty Hadnum, Jenifer Holeva, Lynsey Kelly-Haskins, James McCrackin, Ben McGee, Emma McGee, Max McGee, Lauren Kelly Mitchell, Sharon Nears, Alisa Schoppe, James Tedford, Terry Tedford, Tommy Thomas and Priscilla Walters. Visitation is scheduled for Monday, June 7, 2021 from 5 p.m. to 7 p.m. at Stewart Family Funeral Home, 7525 Old Jacksonville Highway in Tyler. In lieu of flowers, the family requests donations to the Goodgame Cemetery Association, 3626 Chatwood Drive, Pearland, Texas 77584; Fairwood United Methodist Church, 1712 Old Omen Road, Tyler, Texas 75701; orTrinidad Ex-Students Association-Scholarship Fund, P.O. Box 583, Trinidad, Texas 75163.

Services for Mabel McCrackin McGee, 92, of Tyler will be held Tuesday, June 8, 2021 at 2 p.m. at Stewart Family Funeral Home Chapel in Tyler with Rev. Brandy Stevens officiating. Burial will follow at Goodgame Cemetery near Athens under the... View Obituary & Service Information

The family of Mabel McCrackin McGee created this Life Tributes page to make it easy to share your memories.

Services for Mabel McCrackin McGee, 92, of Tyler will be held...

Send flowers to the McGee family.