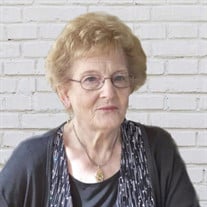 Margaret Ann Parker, 83, of Tyler, Texas went to be with our Lord on September 26, 2021, in Tyler, Texas. The family will receive friends and loved ones on October 2 from 1-3 PM at the Residence Inn, 350 West Heritage Drive, Tyler, TX 75703. Margaret was born in Odessa, Texas to the late Webster Ballinger Clapp and Eva Bernice Clapp nee Cassity on February 19, 1938. She lived in various places in Texas, Nevada and graduated High School in Oklahoma. She met her husband, Roy Earl Parker in El Paso, Texas and married on June 30, 1957. She was a loving and devoted mother of a daughter and three sons. Being an Air Force family, they moved frequently while her husband was stationed in Biloxi, MS, Albany, GA and Bangor, Maine. When Roy was medically discharged from the Air Force they moved back to El Paso where she faithfully served our Lord as a Sunday School teacher through the tenures of pastors Waddell Maple, Art George, and Jack Berg. Not long after retirement they moved to Tyler, Texas and found a home at Green Acres Baptist Church. She loved to work in her yard, entertain family and friends, reading, and crafts. Margaret was preceded in death by her parents, Webster Ballinger Clapp and Eva Bernice Clapp nee Cassity; her husband, Roy Earl Parker; her son, Garry Webster Parker; her brother, Webster Clapp; and her wonderful sister, Evaluinda Sue Johnson. She is survived by her daughter, Deborah Jean Brause nee Parker of Tyler; her sons, Rory Erle Parker of Atlanta, GA and Stephen Glenn Parker of Austin, TX; her grandchildren, Christopher Stephen Montana Braus, Andrew Joseph Parker Braus, Cherie Ashley Parker, Justin Michael Parker, Alisha Brooke Parker, Jordan Leigh Parker and Marie Addison nee Miller; her great-grandchildren, Savannah Addison Parker, Lily Parker, and Conner Addison, her sister-in-law, Mary Beaver Cox nee Burns. She will be interred at the DFW National Cemetery with her husband, Roy Parker. This we know, our grief is but for a season. This we fear, the pain of her absence will not abate. This is His promise, we will reune once and forever more.

Margaret Ann Parker, 83, of Tyler, Texas went to be with our Lord on September 26, 2021, in Tyler, Texas. The family will receive friends and loved ones on October 2 from 1-3 PM at the Residence Inn, 350 West Heritage Drive, Tyler, TX 75703.... View Obituary & Service Information

The family of Margaret Ann Parker created this Life Tributes page to make it easy to share your memories.