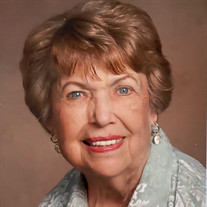 Services for Alberta Marie “Peaches” Owen of Tyler, Texas will be held on Friday, December 13, 2019 at 10 a.m. at Saint Mary Magdalene Catholic Church in Flint, Texas. Interment will be at Rose Lawn Cemetery in Tyler. Arrangements are under the direction of Stewart Family Funeral Home. Mrs. Owen passed away Saturday, December 7, 2019 at Christus Trinity Mother Frances Hospital in Tyler. Alberta Marie “Peaches” Gonsoulin was born on February 4, 1937 in Galveston, Texas to Robert and Isabelle Gonsoulin. She graduated from Incarnate Word Academy in Houston. Peaches was married to Louis Walter Owen in September 1955. The Owen family moved to New Orleans in July 1957 where they established lifelong friendships. Square Dancing and camping trips were integral parts of their life. Peaches coached baseball and was very involved in her children’s activities. They returned to Houston in 1972 where Peaches continued being active in the community. They arrived in Tyler in 1982 when Mr. Owen joined Petrofac. Peaches quickly entrenched herself in the community. She was a longtime member of the Tyler Newcomers club and loved playing golf in the Hollytree Ladies Golf leagues as well as playing Bridge and Mahjong. She was a friend to all and her smile lit up a room. People were immediately drawn to her vibrant personality and she was always willing to do anything it took to help her family, friends and community. In 2006 Louis and Peaches Owen established the Louis and Peaches Owen Family Foundation which has provided critical funding to many organizations across East Texas as well as the Twin Cities, Minnesota area. It is another example of their Christian faith and commitment to help those in need. Peaches and Louis were honored with the 2013 Outstanding Philanthropist Award by the East Texas Chapter of The Association of Fundraising Professionals. The Owen family was a major donor to the initial building campaign for Saint Mary Magdalene Catholic Church in Flint and was deeply involved in their expansion plans. In 2010 Louis and Peaches celebrated their 55th wedding anniversary with a lead gift to Christus Trinity Mother Frances Hospital to build the Louis and Peaches Owen Heart Hospital. After the death of Louis in 2016, Peaches continued her philanthropic endeavors with the establishment of the Louis W. Owen Lung Care Center at the Louis and Peaches Owen Heart Hospital. She was a great friend to all who knew her. Her gentle and gracious heart will be forever remembered for the outpouring of love it generated. Even throughout her various ailments, her thoughts were always focused on how she could help others as opposed to how others could help her. But above all, she had an unbridled passion for her family. Her eyes would light up, her voice would sing and her heart would burst whenever she was around her children, grandchildren and great-grandchildren. They were her life. Peaches will be missed, but her legacy will live on in the hearts and souls of her family. Mrs. Owen was preceded in death by her loving husband Louis; her parents, Robert and Isabelle Gonsoulin; her siblings, Annette Hebert, Robert Gonsoulin Jr., and John ‘Jack’ Gonsoulin. She is survived by a loving family including sister, Suzanne Groneman; children, John Owen and wife Rebecca, Celeste Rekieta and husband Bob, Louis Paul Owen and wife Teresa; grandchildren, Patrick Owen, Sophia Owen, Darby Owen, Kristen Claeys, Nick Rekieta and wife Kayla, Bryce Owen and wife Emily, Lindsay Rowden and husband Harrison; and 17 great-grandchildren, Archer, Isabelle, Alice, Ramona, Vi, Christian, Avery, SylviaMarie, AudreyRose, CeciliaJayne, Peyton, Brooke, Charleigh, Louis, Audrey, Wyatt and Zadok. The family wishes to thank Judy Lassiter, Dylan Steller, Michelle Taylor and Mike Hamschin for their extraordinary care and support of Mrs. Owen. Visitation is scheduled on Thursday, December 12, 2019 from 4:00 p.m. to 7:00 p.m. at St. Mary Magdalene Catholic Church in Flint. A Vigil Prayer Service and Rosary will follow at 7:00 PM. Memorials in honor of Mrs. Owen may be made to Christus Trinity Mother Frances Hospital, at 100 E. Ferguson, Suite 800, Tyler, Texas 75702; Catholic Charities at 202 W. Front St., Tyler, Texas, 75702; Literacy Council of Tyler at 1530 S. Southwest Loop 323, Suite 20, Tyler, Texas, 75702; Alzheimer’s Alliance of Smith County at 211 Winchester Dr., Tyler, Texas, 75701. For more information or to express condolences, visit www.stewartfamilyfuneral.com.

Services for Alberta Marie &#8220;Peaches&#8221; Owen of Tyler, Texas will be held on Friday, December 13, 2019 at 10 a.m. at Saint Mary Magdalene Catholic Church in Flint, Texas. Interment will be at Rose Lawn Cemetery in Tyler. Arrangements... View Obituary & Service Information

The family of Marie "Peaches" Owen created this Life Tributes page to make it easy to share your memories.

Services for Alberta Marie “Peaches” Owen of Tyler, Texas will...

Send flowers to the Owen family.