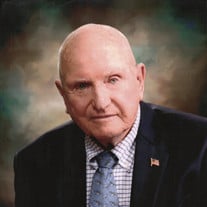 Marshall Ellyson Ewing, age 91, of Tyler, TX, passed away on May 25, 2021, in the company of his family. Visitation will be held on Friday, June 4th, 5–7 p.m., at Stewart Family Funeral Home. A memorial service will be held on Saturday, June 5th, at 2:00 p.m. in the sanctuary of First Presbyterian Church, Tyler. Services will be conducted by the Rev. Dr. Stuart Baskin, with a reception following in Fellowship Hall. Marshall E. Ewing, son of Guy M. and Elsie E. Ewing, was born in Brownwood, TX, on April 27, 1930. His family moved to Georgetown, TX, where he spent his childhood. He graduated from Georgetown High School and attended Southwestern University prior to enlisting in the U.S. Navy in 1948. While in bootcamp, he passed the Naval Aviator test. And after flight training, he was assigned to a fighter squadron returning to combat in Korea, where Lieutenant Ewing served two tours of duty on the carrier USS Essex (CV-9) flying the Corsair and other aircraft (including on-screen in the 1954 MGM film Men of the Fighting Lady). Following his service, he enrolled in Texas Tech University in 1954 and received a B.S. in Petroleum Engineering. While in Lubbock, he met and married his “sweetheart,” Barbara Napier Ewing, of Memphis, TN, in 1957. The Ewings were married for 57 years, residing in numerous locales, including Baytown, Beaumont, and, since 1983, Tyler. Marshall worked for Sinclair Oil & Gas, later acquired by Atlantic Richfield (ARCO), and retired in 1988 after nearly 30 years of service to the company. Marshall and Barbara and their five children enjoyed camping and RVing over 48 states and Canada, as well as traveling internationally. After retirement, he was an active volunteer at PATH, East Texas Food Bank, Meals on Wheels, and the Salvation Army Christmas Toy Program for over 25 years. He worked with the men of First Presbyterian Church on projects at Camp Gilmont Conference Center, and every year looked forward to attending the Presbyterian Men’s Conference at Mo-Ranch in the Hill Country. He was also an active docent and speaker at the Historic Aviation Memorial Museum (H.A.M.M.), where a permanent exhibit recounts his years in the Navy. Most recently, he worked as a hospital desk volunteer at UT Health Tyler. He was a devoted member of First Presbyterian Church, serving as elder, trustee, deacon, and greeter. Marshall was preceded in death by his parents, Mr. and Mrs. Guy M. Ewing; brother, William L. Ewing; and his beloved wife, Barbara. He is survived by brother, Donald Ewing of Bryan; eldest son, David Ewing and wife, Teri of Fredericksburg; eldest daughter, Marsha and husband, Geoff Och of Nacogdoches; daughter, Cynthia and husband, Michael Brevell of Bullard; son, John Ewing of Tyler; son, Charles Ewing and partner, James Spiller of Fort Davis; granddaughter, Stacy Och and partner, Steven Tester of Fort Worth; grandson, Gregory Och and wife, Emily of Nacogdoches; grandson, Joshua Brevell, LT, USN, and wife, Valerie of Portsmouth, NH; granddaughter, Jenny Brevell Bartels and husband, Jeremy of Sugar Land; and great-grandchildren, Logan and Amelia Bartels of Sugar Land, and Madison Sibble of Tyler; as well as numerous cousins, nieces, and nephews. Memorials, if desired, may be made to First Presbyterian Church, 230 W. Rusk St., Tyler, TX 75701 (http://www.fpctyler.com/give); Camp Gilmont, 6075 State Hwy 155 N. Gilmer, TX 75644 (https://gilmont.networkforgood.com/projects/56836-gilmont-main-donations); Mo-Ranch, 2229 FM 1340, Hunt, TX 78024 (https://www.moranch.org/support-mo-ranch/donate-now); H.A.M.M., 150 Airport Drive #2-7, Tyler, TX 75704 (http://tylerhamm.org/donate); or other institution of choice.

Marshall Ellyson Ewing, age 91, of Tyler, TX, passed away on May 25, 2021, in the company of his family. Visitation will be held on Friday, June 4th, 5&#8211;7 p.m., at Stewart Family Funeral Home. A memorial service will be held on Saturday,... View Obituary & Service Information

Send flowers to the Ewing family.