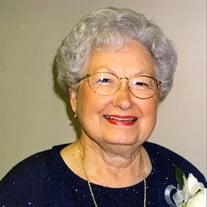 A memorial service for Martha Christine Lyon Blalock, 95, will be held at Stewart Family Funeral Home at 11:00 a.m. on Friday, March, 26, 2021, with the Reverends Pike Wisner and Jim Shamburger officiating. There will be a visitation on Thursday, March 25 from 5-7 p.m. also at Stewart Family Funeral Home. The family encourages the courtesy of mask-wearing and social distancing during the services. Martha Christine Lyon was born December 26, 1925, in Dallas, TX, the daughter of Hubert C. Lyon and Thelma Pledger Lyon. She began school at Marsh Elementary in Tyler and as a first grader, walked in the first Rose parade as a red crepe-paper rosebud. After graduating from Nederland High School in 1943, she worked in the accounting department of Consolidated Ship Yards in Orange, TX during WWII. Martha moved back to the Tyler area and met and married Joe Blalock. They celebrated 66 years of marriage before his death in 2014. Her greatest joy was being married to him and rearing their daughters, Sondra and Cheryl. She retired in 1987 after 25 years in the accounting department of Texas Power and Light (Oncor). Mrs. Blalock was a longtime and active member of First Baptist Church of Tyler, serving over 30 years in the Nursery Department. She was active in the PTAs at Ramey Elementary, Boulter Jr. High, and John Tyler High School and received an honorary life membership in Texas PTA. She (with help from Joe) worked tirelessly as a leader of two Blue Bird and Camp Fire Girls groups for 12 years. She enjoyed needlework, sewing, feeding and watching birds, working in her flowers, reading, and playing “42” and Jokers. She was a wonderful neighbor and friend and enjoyed traveling. Her big love in this life though was her family. She planned and cooked for many trips with her grandchildren and family vacations to the beach. She is survived by her daughter Sondra (Donald) Adair of Arlington, and their children, Courtney (Jonathan), Emilia and Haydon Applequist of Potomac, MD, and Nathan (Lindsay), Emerson, Payton, and Cole Adair of Houston; and daughter Cheryl (Jim) Shamburger of Tyler, and their children, KC (Marshall), Eden, and Drew McSpadden of Austin, Travis Shamburger of Plano and his fiancée, Mary Eberhart of Gainesville, and Austin (Tammy), Brooklyn, Gretchen, and Harris Shamburger of Plano. The family would like to thank Miriam Gruenwald and the staff at Azalea Trails Senior Living and Memory Care for the years of loving companionship and care they provided. If so desired, memorials can be directed to First Baptist Church Tyler Sanctuary Renovation fund, 301 W. Ferguson St., Tyler, TX 75702.

A memorial service for Martha Christine Lyon Blalock, 95, will be held at Stewart Family Funeral Home at 11:00 a.m. on Friday, March, 26, 2021, with the Reverends Pike Wisner and Jim Shamburger officiating. There will be a visitation on Thursday,... View Obituary & Service Information

The family of Martha Christine Lyon Blalock created this Life Tributes page to make it easy to share your memories.

A memorial service for Martha Christine Lyon Blalock, 95, will...

Send flowers to the Blalock family.