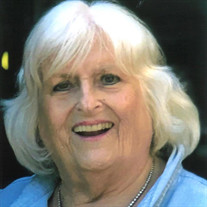 On Tuesday, June 16, 2020, Marti Craft (Mimi) Phelps, the consummate Craft in her family, quietly passed into the arms of her Savior Jesus Christ joining her beloved late husband, Pepe. Born Martha Virginia Craft, she was known to family and friends as Marti and then later as a grandmother, Mimi. She embodied the spirit, tenacity, love, grace, and impeccable character of the hard-working father and generous loving mother who raised her and instilled these into the family she raised. As the middle daughter of three girls, Mimi grew up in a hardscrabble home filled with love and hard work in Hamilton, Ohio. Carving herself a niche within her family, Mimi learned to maneuver within the bustling household to make her own indelible mark in this world. Mimi’s smile and laughter would light up every room she entered and could command the conversation through her wit, grit, love, and at times an unfiltered truth that proved her perspective and experience. One always knew where they stood with Mimi, yet above all else, the wonderful woman with the beautiful white hair, hearty laugh, and genuine smile made everyone who knew her feel a sense of warmth, charm, grace, and strength that captivated and gravitated others to be around her. Marti was able to balance the grace and charm of a quintessential southern woman while retaining an outward courage of her northern upbringing. There were many sides of Marti, a mother of two, the loving and faithful wife of Pepe (Phil), grandmother, great-grandmother, sister, and aunt of only nephews. She was an entrepreneur alongside Pepe’s MP Industries while taking over her own ice cream business in Tyler, owning and operating The Palace Ice Cream Parlor for 10 years. Throughout the many family moves, Marti volunteered at various PTA’s for her children, ultimately receiving a lifetime membership. As a member of Green Acres Baptist Church, Mimi worked at the Early Education Center faithfully driving the church van to pick up the students after school each day. Finding ways in all she did to touch the lives of countless youth by her magnetic personality. Marti also was a part in numerous youth mission trips. Side by side with Pepe, she served as a cook, sponsor, or the ever-present church ”mom”. In addition to the numerous hours on these trips, Mimi served Green Acres as a secretary for the youth and college aged students. She hosted activities and events in her home making all feel welcome and as part of her extended family. In later years, Mimi was very active in Shirley Rhodes’s Sunday School class. With her endless supply of energy, Marti was active player of 2 Mah Jongg groups and continued to participate in her cherished supper club. These activities along with so many others, provided Marti’s family with immeasurable joy in the stories and tales of friendship that endeared her to so many. However, likely the most important and lasting image of Marti is how her insistence and desire for her family to remain close was borne out each and every Sunday evening for years and years. Sunday with Mimi was expected and anticipated. Gathering in her home, enjoying her delicious meals, but mostly just enjoying the health and love that family provides. Spades, hearts, spinners were all games you had to play after eating together as a family. Everyone was welcomed. A weekend was not allowed to escape without a visit to Mimi. These were the times, the memories, and love she bestowed which resonate with her children, grandchildren, great-grandchildren, siblings, and nephews. For so many of us Mimi was and will remain the center of our family. Her loss is magnificent, but her memory is far greater than the void of her loss. Alongside her husband of 51 years, Mimi and Pepe cut a swarth through Texas and Louisiana in the 1960’s and 70’s moving every two years with Pepe’s career at Schlumberger, before settling in Tyler. Two Ohioans quickly acclimated and became ardent fellow Texans and like Pepe, who preceded her in death in 2006, Mimi leaves an enduring and powerful legacy – her family. Born on May 22, 1935, Marti was the daughter of the late Clyde and Pearl Craft and the sister of Mary (Richard) Law of Hamilton, Ohio and Shirley (Bill) Prather of Evansville, Indiana. Mimi leaves behind her two children, Jeff (Jill) Phelps of Tyler and Marta (Steve) Fitzpatrick of Tyler; grandchildren, Kelli (Blake) Armstrong, Jayme Fitzpatrick, Maggie (Ty) Wright all of Tyler, Matthew (Tracy Anne) Phelps of San Marcos and Neill (Aleigha) Phelps from New Albany, Indiana. Mimi also leaves her adoring ten great-grandchildren, Avery, Alec, and Pierce Armstrong, Cal and Clyde Wright, Libby and Judah Phelps, and Zoey, Zaylee, and Kit Phelps as well as an 11th great-grandchild on the way. Mimi also leaves numerous nephews. Visitation will be held Friday, June 19 from 5 to 7 PM at Stewart Family Funeral Home on Old Jacksonville Highway. Graveside services will be held at 10 AM on Saturday, June 20 at The Cathedral in the Pines Cemetery on South Broadway. All who wish are welcome to attend. Pallbearers will be Blake Armstrong, Ty Wright, Matt Phelps, Neill Phelps, Scott Phelps, Greg Law, Larry Kim and Barry Fowlkes. Honorary Pallbearers are Rick Law, Scott Adams, Sean Adams, Seth Phelps, Alec Armstrong, Pierce Armstrong, Cal Wright, Clyde Wright and Judah Phelps. In lieu of flowers, memorials may be made to The Hospice of East Texas Foundation, 4111 University Blvd., Tyler, TX 75701 and Bethesda Health Clinic, P.O. Box 1999, Tyler, TX 75710.

On Tuesday, June 16, 2020, Marti Craft (Mimi) Phelps, the consummate Craft in her family, quietly passed into the arms of her Savior Jesus Christ joining her beloved late husband, Pepe. Born Martha Virginia Craft, she was known to family and... View Obituary & Service Information

The family of Martha "Marti" Virginia Phelps created this Life Tributes page to make it easy to share your memories.

Send flowers to the Phelps family.