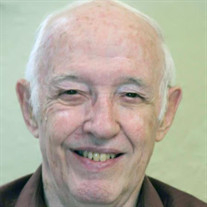 A Memorial Service for Martin Roy Davis, 89, of Tyler, Texas, will be held on Saturday, August 7, 2021 at 1:30 p.m. at Highland Presbyterian Church, 3101 Paluxy Drive, Tyler, with Rev. Scott Mackey officiating under the direction of Stewart Family Funeral Home. There will be visitation with the family immediately following the service. Martin passed away Friday, July 30, 2021 in Tyler. He was born June 10, 1932 in Lisbon, Iowa to Harold and Mildred Davis. Martin graduated from Lisbon High School in Lisbon, Iowa. He was drafted into the U.S. Army and served in Korea during the Korean War. After his military service he lived in Cedar Rapids, Iowa while working for the Dearborn Brass Company. The Company moved its manufacturing operations to Owentown, Texas, in the late 1970s which resulted in the relocation of Martin and his family to Tyler in 1979. Through the years he held a number of positions with the company and was the Director of the Engineering Department at the time of his retirement. Martin was a member of Highland Presbyterian Church where he served as an Elder and as Clerk of Session. For many years he was a member of the Rambling Roses Square Dance Club, Tyler Yacht Club, and the Smith County Master Gardeners. He enjoyed square dancing, sailboat cruising and racing, and was an avid gardener and a skilled photographer. He was a sports fan and enjoyed cheering for the Iowa Hawkeyes and the Dallas Cowboys. He also enjoyed auto racing, particularly the IndyCar series. Martin was preceded in death by his wife of 67 years, Edith; his daughter, Julie; his parents; his twin sister, Margaret Phelps; and two nieces. He is survived by his loving family including his son, John and his wife Becky; two granddaughters, Chrissy Davis and Katy Lewis (Kevin); two nieces; and a nephew in Iowa. If desired, memorials may be made to Highland Presbyterian Church, 3101 Paluxy Drive, Tyler, TX 75701.

A Memorial Service for Martin Roy Davis, 89, of Tyler, Texas, will be held on Saturday, August 7, 2021 at 1:30 p.m. at Highland Presbyterian Church, 3101 Paluxy Drive, Tyler, with Rev. Scott Mackey officiating under the direction of Stewart... View Obituary & Service Information

The family of Martin Roy Davis created this Life Tributes page to make it easy to share your memories.

A Memorial Service for Martin Roy Davis, 89, of Tyler, Texas,...

Send flowers to the Davis family.