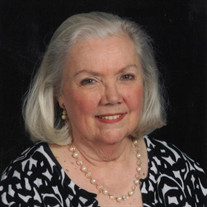 Mary Evelyn Longman Rossman entered into the gates of Heaven on Wednesday, November 25, 2020 to be with her Lord and Savior. Mary, born on April 3, 1931 to Walter and Isabell Longman, grew to be an amazing wife to Robert (Bob) Rossman M.D., as well as an incredible mother to their six children. Her talents were well known by many as she was gifted in cooking, sewing, creating art from many mediums, and most importantly, her daily walk with God. Mary was born in Port Arthur and attended public schools there where she went on to be named Miss Port Arthur 1949. Many have seen the picture of Mary as Miss Port Arthur lying back on a crescent moon in a ball gown made by Mary herself! Mary’s beautiful smile illuminated the city’s local magazine. Mary’s gifts were countless and ultimately led her to be the first runner up in the Miss Texas pageant, 1949. Her children, grandchildren and many others, revel in the fact Mary actually sewed a dress on stage as her talent! Mary also loved music and played in an ‘all girl’ swing band while in high school. The nightly pay was $15 which Mary promptly bought herself a new pair of “heels”! On July 7th, 1950, Mary married the love of her life, Bob Rossman (which happened to be her best friend’s older brother!) Mary supported Bob’s desire to be in the medical field which led them to live in Galveston, Oklahoma City, Alto, Houston, and ultimately Tyler, Texas. While on this journey, Mary (an only child) went on to have six children. Numerous stories have been shared by the kids as to the wonderful yet craziness that went on with six siblings! Mary’s relentless sense of humor had to be the driving force of the clan as each child has the best stories of growing up. Mary and Bob had a true love over the past 70 years. Mary’s artistic gene was never lessened and could be seen in the two houses she personally designed. Mary was an avid gardener and an animal enthusiast. She raised her own sheep; sheered them to then hand spin and dye their wool, creating beautiful and beloved clothing. Mary and Bob had a yearning to live off of God’s land; so, in addition to the sheep, they had chickens, cows, cats, dogs and a horse. Mary was admired for her cooking off a wood burning stove, all while having other cooking luxuries available. Mary was featured in several newspaper articles illustrating her many, many talents. She was such a gracious woman and shared her talents with her family and friends. Mary’s walk with the Lord grew stronger and stronger over the years. She made many friends through their faith-walk together. Mary read, learned and spiritually understood the scripture; she sang in the choir and taught Sunday school. She shared with her family where she “finally” heard the Gospel while in the Lay Witness Ministry where her life was transformed. Mary has stated one of her most favorite experiences was “living with a wise, gentle, Godly husband.” Mary stood by the Sea of Galilee and watched the sunrise over it. She was overjoyed from the center of the Coliseum in Ephesus, Turkey as How Great Thou Art was sung. Mary was filled by God’s spirit and knew of His amazing grace! Throughout Mary’s life she had many experiences; most quite joyous, some filled with sadness. Mary is survived by her husband Dr. Robert E. Rossman of Tyler, TX; her children Mike Rossman and wife Pam, Georgetown, TX; Bryan Rossman and wife Susan, Tyler, TX; Cindy Harper and husband John, Tyler, TX; daughter-in-law Pam Rossman, Plano, TX; Kathy Epperson and husband Daryl, Houston, TX; Wes Rossman and wife Angie, Tyler, TX. She is also loved and remembered by her fourteen grandchildren: Thomas Harper, LeighAnne Allen, MaryAnna Rashti, Lauren Collins, Ross Rossman, Bryan “Bear” Rossman, Taylor Hagler, Ally Neill, Will Epperson, Caitlyn Epperson, Stephen Rossman, Christian Rossman, Meagan Rossman, and Cameron Eastman. Mary’s legacy continues on as well with her eleven great-grandchildren. Mary is preceded in death by her granddaughter Kelli Anne Harper, daughter-in-law Cynthia Rossman, and son Mark A. Rossman. In lieu of flowers, memorials may be given in Mary’s memory to Bethesda Clinic (409 W. Ferguson Street, Tyler, TX 75702; 903.596.8353); or, Grace Community Church (3215 Old Jacksonville Road, Tyler, TX 75701; 903.882.3323); or, Hospice of East Texas (4111 University Blvd, Tyler, TX 75701; 903.266.3400). A private, family graveside service will be held, however, plans for a celebration of Mary’s life for all to attend will be set at a later date. Being a woman of great faith, Mary had many bible verses she treasured. One in particular that she truly loved was Colossians 3: 1-4, “Since, then, you have been raised with Christ, set your heart on things above, where Christ is, seated at the right hand of God. Set your minds on things above, not on earthly things. For you died, and your life is now hidden with Christ in God. When Christ, who is your life, appears, then you also will appear with him in glory.” May all that have known Mary please feel her peace. Blessings to each of you.

Mary Evelyn Longman Rossman entered into the gates of Heaven on Wednesday, November 25, 2020 to be with her Lord and Savior. Mary, born on April 3, 1931 to Walter and Isabell Longman, grew to be an amazing wife to Robert (Bob) Rossman M.D.,... View Obituary & Service Information

The family of Mary Evelyn Rossman created this Life Tributes page to make it easy to share your memories.

Mary Evelyn Longman Rossman entered into the gates of Heaven...