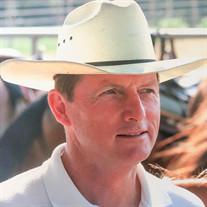 On Monday, May 11, 2020, Matt Clapp, loving husband and father, passed away at age 68. Matt was born on September 5, 1951 in Tyler, TX to Harold and Ann Clapp. He played football for the Oklahoma State Cowboys, where he received a degree in Animal Husbandry in 1972. On May 18, 1973, he married Janie Rowe Clapp. Matt was a cattle rancher and the Founder and Summer Camp Director of Rockin’ C Ranch. They raised two children, Travis and Katherine. Matt had a deep love for all children which led him to open a Christian camp on his working cattle ranch in order to share the love of God as well as teach children to build strong character and work ethic. Some of the key lessons that Mr. Matt, as the campers called him, instilled in his campers were “Leave it better than you found it!” and “Go the extra mile.” For all of us that had the pleasure of knowing Matt, our lives are better and greatly enriched because of him. Matt always went the extra mile. Matt lived his life in service to God and others. He was a man who showed true grit by being a hardworking cattle rancher, a true problem solver, and by fighting a 15-year battle with Parkinson’s. Matt was preceded in death by his father, Harold, and his son, Travis. He is survived by his wife Janie; his mom, Ann; his daughter, Katherine Crow and husband Nathan; siblings, Mike Clapp and wife Alison, Patsy Clapp, and Pam Evans and husband Will; as well as three grandchildren, Iyler, Camp, and Jane. He is also survived by many cousins, nieces, nephews and many friends that are just as close as family. The family welcomes you to join them for Matt’s service on May 20, 2020 at the family homestead, Rockin’ C Ranch, at 2:00 p.m. Flowers may be sent to the family or donations may be sent to Cancer Foundation for Life/ FitSteps for Life at 218 N College Ave in Tyler, TX or Frontier Camp at 131 Frontier Camp Rd. Grapeland, TX 75844. In His Grip.

On Monday, May 11, 2020, Matt Clapp, loving husband and father, passed away at age 68. Matt was born on September 5, 1951 in Tyler, TX to Harold and Ann Clapp. He played football for the Oklahoma State Cowboys, where he received a degree in... View Obituary & Service Information

The family of Matt Clapp created this Life Tributes page to make it easy to share your memories.

Send flowers to the Clapp family.