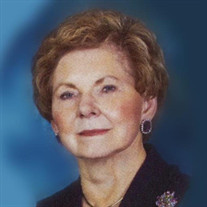 Melvina Newsome Buie, 90, went to be with the Lord on February 11, 2022, following a long battle with Alzheimer’s. Melvina was born on May 25, 1931, in Mt. Vernon, Texas, the daughter of Mattie Lou Davis and R.A. Newsome. She was preceded in death by her sister, Billie Newsome Mason. She is survived by her loving family, including her husband of seventy-three years, Herb Buie; sister, Joy Newsome Bryant; son, Rex Buie and wife, Miae; daughter, Robin Buie and grandchildren, Mallory, Madison and Emma; brother-in-law, Norris Buie; and sister-in-law, Lavonne Harris. Melvina married her high school sweetheart, Herb Buie, on August 27, 1948. She was seventeen and he was eighteen. According to Herb, he first noticed Melvina Newsome in the eighth grade, and they started dating the next year during ninth grade. Herb remembers that she was very pretty and popular. He once said that all the boys in South Tyler wanted to date Melvina, but he had a strategy. “I decided I would take her to church. I went there seeking Melvina, not the Lord; but I got both!” A short time afterward, Melvina and Herb both made their public professions of faith, accepting Jesus Christ as their savior. One particular scripture became the guiding light for their lives together, Matthew 6:33, “But seek ye first the kingdom of God, and his righteousness; and all these things shall be added unto you.” In her early years, Melvina worked as a payroll clerk for Bryant Heater, now Carrier Corporation, and then worked in bookkeeping at Tyler Packing Company, before retiring to take care of her children. The only time Melvina was apart from her husband was when he was drafted during the Korean War. Melvina was considered in every decision she and Herb ever made. Her heart’s desire was to bless and help others with all their resources. She never desired earthly goods but wanted to store up her treasure in Heaven. “We have a duty to give back to God for the blessings He gives us by giving to those who are less fortunate,” a belief Melvina and Herb shared. Around 1955, Melvina became an avid hunter and continued for sixty years. She still holds the record for the biggest deer killed in her hunting group. She was a “sharp shooter” with a 30-06 rifle. She was also a very humble and gentle wife, mother and friend. One of her pastimes was sewing for her daughter Robin, and later in life, for her grandchildren. Many said she could have been a professional seamstress. Once her children were grown, one of the things that Melvina wanted to do was travel, beginning in 1984. For the next thirty years, Melvina and Herb were able to see most of the world. Together, Melvina and Herb dedicated their lives to serving others as much as they possibly could. Melvina, along with her husband, have been supportive in many different ways, including scholarships at Lee University, Tyler Junior College, UT Tyler, and others. She was determined to help create a better life for as many as she could. Nine years ago, Melvina was diagnosed with Alzheimer’s. Throughout her illness, Herb was by her side every day, just as he has been for the past seventy-three years. The loving relationship Melvina and Herb shared is rooted in their deep and abiding faith and their mutual love and respect for one another. Sharing their love of Jesus Christ has always been central to their lives together. Herb is grateful that Melvina is at peace and now in the arms of her Lord and Savior. “And the God of all grace, who called you to his eternal glory in Christ, after you have suffered a little while, will himself restore you and make you strong, firm and steadfast.” – 1 Peter 5:10 Services for Melvina Newsome Buie will be held on Thursday, February 17, 2022, at 2:00 p.m. at Rose Heights Church with Rev. Doug Anderson officiating. A private family graveside service at Rose Hill Cemetery will precede the service under the direction of Stewart Family Funeral Home. Pallbearers will be the Pastoral Staff of Rose Heights Church. Honorary pallbearers will be the Leadership Team of Rose Heights Church and the Board of Directors of Southside Bank. In lieu of flowers, memorials may be made to the Alzheimer’s Alliance of Smith County (www.alzalliance.org) 211 Winchester Dr., Tyler, TX 75701.

The family of Melvina Newsome Buie created this Life Tributes page to make it easy to share your memories.

Melvina Newsome Buie, 90, went to be with the Lord on February...

Send flowers to the Buie family.