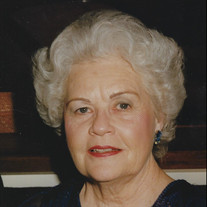 A Memorial Service for Nina Sue Thorndike, 94, is scheduled for 11:00 a.m. Wednesday, April 21, 2021 at First Christian Church, Tyler, TX with Dr. Chris Pulliam, Senior Minister officiating. Private burial will be in Tyler Memorial Park under the direction of Stewart Family Funeral Home. Mrs. Thorndike died April 17, 2021. She was born November 26, 1926 in Cleveland, Oklahoma, the daughter of Daniel Eldress and Venice Herndon Bizzell. Her family moved to the East Texas area when she was in grade-school and she graduated from Overton High School, Tyler Junior College, and the University of Texas at Tyler. Having received many scholastic honors, she was elected to Who’s Who Among Students in American Universities and Colleges while attending U. T. Tyler, and membership to Alpha Chi and Phi Alpha Theta. The Tyler branch of American Association of University Women honored her by giving a named gift to the Educational Foundation. On March 19, 1949, she married Allen Kingsland Thorndike. They had one son, Allen Brian Thorndike who died in 1990 at age 39. In addition to her love for learning, she had a passion for travel. She and her husband traveled extensively, visiting 39 countries and principalities on six continents, some of which allowed her to study there, earning credit hours toward her degrees. Mrs. Thorndike was a member of First Christian Church, where she was an active member of the Fidelis and Builders Classes and Christian Woman’s Fellowship. She was a former member and president of City Park Garden Club, past officer and member of Tyler Woman’s Forum, member of American Association of University Women, and Tyler Salvation Army Woman’s Auxiliary. She was preceded in death by her parents, husband, son, and sister, Wanda Jean Hoermann. She is survived by a daughter-in-law, Janet Thorndike Bussey and her husband, Ronnie E. Bussey of Longview, TX, two grandchildren, Jarod M. Thorndike of Dallas, TX, and Trisha D. Krause and her husband, Daryl G. Krause, and one great-grandchild, Conner A. Krause, all of Pflugerville, TX, and a brother-in-law, Dr. A. Leroy Hoermann of College Station, TX. The family wishes to thank her niece, Janet Simonds of Tyler, TX for her steadfast care and concern of Nina Sue over the years as well as the staff of Garden Estates of Tyler. If desired, memorials may be made to First Christian Church, 4202 So. Broadway Ave., Tyler, TX 75701.

The family of Nina Sue Thorndike created this Life Tributes page to make it easy to share your memories.

A Memorial Service for Nina Sue Thorndike, 94, is scheduled for...

Send flowers to the Thorndike family.