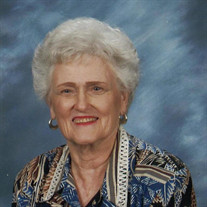 Pat Hudson, 88, of Tyler passed away Saturday, April 23, 2022 in Tyler. Pat and her late husband, Tommy had retired to the Tyler area in 1996. They initially moved to Emerald Bay then relocated to the Meadow Lake Senior Living community in 2011. They loved the wonderful people of the community and enjoyed the many activities offered along with the time spent with everyone. She was born December 20, 1933 in San Angelo to Maburn and Merrily Harris. After the early death of her mother, she was raised primarily by her grandmother, affectionately known as Mother Perle in McCamey. Her family operated the Texas Hotel in McCamey from 1930 until 1952. She graduated from McCamey High School in 1952 and later attended Tarleton State College in Stephenville. She met a fine, young man from Louisiana who was hitchhiking back from California after being discharged from the U.S. Army. He stopped by to visit his uncle in Iraan, Texas. Fortunately, his uncle got him a job in the oil fields around McCamey. His name was Tommy Hudson and they got married in 1953. They celebrated over 67 loving years of marriage until his passing in 2021. Pat and Tommy lived in a variety of places from 1953 to 1964 until they settled in the Dallas-Fort Worth area. Pat was employed by the Souhland Corporation and later spent many years with Linbeck Construction where she served as an office administrator on a variety of construction projects. Pat was preceded in death by her loving and devoted husband, Tommy and brother-in-law, Howard Hudson of Rayville, LA. She is survived by her loving family, including two sons, Alan Dane Hudson and wife Kandy of Bonney Lake, WA and Kelly Lyle Hudson and wife Cynthia of Bedford. There are four grandchildren, Kristen Wollard and husband Cody of LaPorte, Kara Marshall and husband Brian of Houston, Clay Hudson of Richardson and Tammy Hudson of Bedford. She is also survived by sister, Lelysle White of Dallas, sister-in-law, Dorothy Jordan and husband Jim of St. Mary's GA, sister-in-law Laverne Hudson of Rayville, LA and Tommy's favorite double first cousin, Doug Hudson and wife, Marilyn of Monroe, LA along with many nieces and nephews. The family will receive friends and loved ones from 6 PM to 8 PM on Wednesday, May 4th at Stewart Funeral Home located on Old Jacksonville Hwy in Tyler. A family graveside service will be held at Rose Lawn Cemetery on Thursday, May 5th at 2 PM. A public memorial service will be held at 3 PM at Meadow Lake Senior Living in the Laurel Auditorium with Drew Tillman officiating. If desired, memorials may be made to the Meadow Lake Christmas Holiday Fund, 16044 CR 165, Tyler, TX 75703.

Pat Hudson, 88, of Tyler passed away Saturday, April 23, 2022 in Tyler. Pat and her late husband, Tommy had retired to the Tyler area in 1996. They initially moved to Emerald Bay then relocated to the Meadow Lake Senior Living community in... View Obituary & Service Information

The family of Pat Harris Hudson created this Life Tributes page to make it easy to share your memories.

Send flowers to the Hudson family.