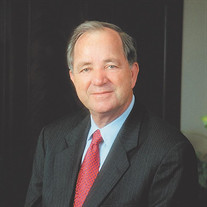 Patrick Reese Thomas, M.D., FACS, peacefully passed away on Saturday, September 14, 2019 at the age of 85. He was born in Vernon, Texas on August 29, 1934, to Elizabeth and William Patrick Thomas. Growing up, he pursued his love of golf, which he continued as a member of the SMU golf team. He was President of his senior class in college and earned his BS in Biology. Dr. Thomas received his medical degree from the UTMB in Galveston, Texas, in 1959. He and his college sweetheart, Mary Dale Turner, were married two weeks later and moved to New York City where he completed his 5-year postgraduate training at NYU-Bellevue Medical Center. He became a Diplomate of the American Board of Surgeons in 1965 and a Fellow of the American College of Surgeons in 1968. His distinguished military career began in 1964 when he was drafted into the U.S. Army as a surgeon. He was commissioned at Fort Hood in Killeen, Texas, and was given the rank of Captain, Medical Corps, U.S. Army. In 1965, as the war escalated, he was deployed to South Vietnam, where he served as Chief of Surgery in the 8th Field Hospital in Nha Trang, Vietnam. His hospital supported the 1st Infantry Division, the 101st Airborne Division, the 1st Air Cavalry Division, the 25th Infantry Division and the Korean Tiger Division. He once operated for 54 continuous hours during the battle of the Ia Drang Valley. For his service, Dr. Thomas was awarded the Bronze Star, which is awarded for acts of heroism, meritorious achievement or exemplary service in a combat zone. Dr. Thomas co-founded Trinity Clinic, a multi-specialty physician clinic, serving as administrator while maintaining a full-time surgical practice. He played a critical role in the founding of Trinity Mother Frances Hospitals and Clinics and was an architect of the merger of Trinity Clinic and Mother Frances Hospital. He became President and Chief Medical Officer of Trinity Mother Frances Health System in November 1995. At one time, he was Chief of Surgery at both ETMC and Mother Frances. Until his death, he served as the Senior Development Officer, Major Gifts, for CHRISTUS Trinity Mother Frances Foundation. Dr. Pat’s civic activities included over 30 years of service on the Board of Trustees for Tyler Junior College. He served as President of the American Heart Association, the American Cancer Society and the East Texas Symphony Orchestra. In 1969 he received the Windsor Award for Outstanding Community Service in 1969 from the Tyler Chamber of Commerce. Other professional affiliations included: President of the Texas Surgical Society, President of the Southern Society of Clinical Surgeons, and President of the American College of Surgeons North Texas Chapter. Dr. Thomas received the 2001 Ashbel-Smith Distinguished Alumnus Award from the University of Texas Medical Branch at Galveston. He was a member of Phi Delta Theta fraternity, the Seekers Sunday School Class at Marvin United Methodist Church and the SMU Mustang Alumni Association. We rejoice in the knowledge that he has been reunited with the love of his life, MD, who preceded him in death in 2016. Survivors include daughter, Susan Thomas Rippy and husband Reed; son, Kevin Scott Thomas and wife Belle, all of Tyler; and sister, Ann Thomas Williams of Lubbock. “Dockie” was blessed with four wonderful grandchildren – Morgan Elizabeth Rippy of Houston, James Patrick Rippy of Washington DC, Stella Caroline Thomas and Turner Reese Thomas of Tyler. Other family includes two nieces, Gwynn Ware of Houston and Nancy Weaver of Dallas. A celebration of his life will be held Saturday, September 21, at 10:00 a.m. in the Marvin United Methodist Church sanctuary, Dr. Doug Baker officiating. The family will receive friends at a reception in Pirtle Hall immediately following the service. The family would especially like to thank Fabulous Frank Turner, his companion and friend for four years, friends and caregivers at The Hamptons Assisted Living and the members of the Physicians Wednesday Morning Choir Practice. In lieu of flowers, the family requests memorials be made to CHRISTUS Trinity Mother Frances Foundation, 100 E. Ferguson St., Ste 800, Tyler, TX 75702, Marvin United Methodist Church - Music Ministry, 300 W. Erwin St., Tyler, TX 75702, The Hospice of East Texas Foundation, 4111 University Blvd., Tyler, TX 75701, or the charity of your choice.

Patrick Reese Thomas, M.D., FACS, peacefully passed away on Saturday, September 14, 2019 at the age of 85. He was born in Vernon, Texas on August 29, 1934, to Elizabeth and William Patrick Thomas. Growing up, he pursued his love of golf, which... View Obituary & Service Information

The family of Patrick R. Thomas M.D. created this Life Tributes page to make it easy to share your memories.

Send flowers to the Thomas family.