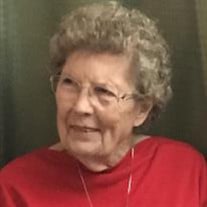 Patsy Wynne Cooper Carpenter died in Fayetteville, Arkansas, on May 22, 2022, at the age of ninety-two. She was born in Camp County, Texas on July 18, 1929, to Chalmas E. Wynne and Ruby Grace Kimbell Wynne. Patsy graduated from Pittsburg High School in Pittsburg, Texas at the age of fifteen and completed her studies at Federal Institute Business School in Tyler, Texas. She married James Arthur Cooper, in Camp County, Texas on April 4, 1947. Following the death of her husband James in 1954, Patsy worked as a secretary at the Henry and Peters accounting firm in Tyler, Texas, where she worked until her retirement in 1978. At that time she married Hubert B. Carpenter on October 14, 1978, and moved back to Pittsburg, Texas. Patsy moved to Tyler, Texas following the death of her husband Hubert in 2014 and moved to Fayetteville, Arkansas in 2021. Patsy had a deep Christian faith. Although raised as a Methodist, she was an active member of several Baptist churches. She loved children and usually worked in the church’s ministry to young children. She is survived by her son and daughter-in-law, Russell and Nancy Cooper, of Fayetteville, Arkansas; granddaughter and husband, Carolyn and Parker Howard of Fayetteville, Arkansas; grandson Will Webb of Denver, Colorado; grandson and wife Wade and Victoria Webb of Cleves, Ohio and great-grandchildren, Jack and Sally Howard of Fayetteville, Arkansas and Tripp and Tilly Webb of Cleves, Ohio, her sister-in-law, Shirley Wynne of Bullard, Texas and two special nieces who were considered by Patsy as daughters, Joyce Schaeffer, of Paris, Texas and her husband Ed, and Jan Weiberg of Paris, Texas and her husband Doug. Patsy also is survived by many more Wynne, Cooper, and Carpenter stepchildren, nieces, nephews, and blended family members who she loved dearly. Patsy was preceded in death by her parents, her husbands, James Cooper and Hubert Carpenter, sisters Billie Wynne Holverson, Grace Wynne Cooper, and Jean Wynne, and brothers Edwin “Sonny” Wynne and Richard Perry Wynne. A memorial service will be held in the chapel at Marvin United Methodist Church, 300 West Erwin Street in Tyler, Texas on Thursday, June 2 at 2:00 p.m. following a private family graveside service at Tyler Memorial Park. The family will receive friends at a reception at the church following the memorial service. In lieu of flowers, memorial gifts can be made to the Washington Regional Hospice, c/o the Washington Regional Medical Foundation, P.O. Box 356, Fayetteville, AR 72702 or to the Capital Campaign for the Providence Classical Christian Academy, P.O. Box 173, Lowell, AR 72745.

Patsy Wynne Cooper Carpenter died in Fayetteville, Arkansas, on May 22, 2022, at the age of ninety-two. She was born in Camp County, Texas on July 18, 1929, to Chalmas E. Wynne and Ruby Grace Kimbell Wynne. Patsy graduated from Pittsburg High... View Obituary & Service Information

The family of Patsy Carpenter created this Life Tributes page to make it easy to share your memories.