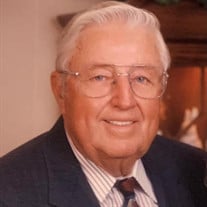 Paul Ford Lilly passed away peacefully on April 26, 2022, at the age of 97, at The Hospice of East Texas HomePlace in Tyler, Texas. He was born in Tyler, Texas on June 16, 1924 to Roy L. Lilly and Clara Nolan Lilly. Paul grew up in Tyler, attended Tyler Public Schools and graduated from Tyler High School in 1942. Upon graduation, he was called to serve his country in the United States Army during World War II. He proudly served for the next four years after which he returned to Tyler. He married the love of his life, Theresa Etta Cope, on July 24, 1948 at Marvin Methodist Church in Tyler. Paul and Theresa had a wonderful 73-year life together. They were blessed with two children, a daughter and a son. Paul was a Christian, a lifelong Baptist and was a member of Green Acres Baptist Church for 58 years. He was a Master Mason with more than 65 years of service and a Charter Member of Sharon Shrine Temple. Paul had an amazing work ethic and was blessed with a long, healthy and very active life. He had a remarkable career that spanned more than 70 years in manufacturing industries. After serving an apprenticeship in his Uncle’s machine shop; he went to work for Tyler Pipe and Foundry where he retired as Manager of Plant Engineering after 38 years of service. His passion for machinery and manufacturing led to the establishment of Lilly Machinery, Inc. where he had his second career which he enjoyed for another 30 years alongside his wife, Theresa, and his son, Roy. He continued to go to work daily well into his 90’s. Paul loved his family dearly. He adored his three grandchildren and was so very proud of each one of them. Paul enjoyed playing golf with his friends and his family. He and Theresa cherished their many summer trips to New Mexico to play golf, spend time in the mountains and go to the horse races. He loved the outdoors and his many trips to the ranch in West Texas where he had some of his happiest times. He welcomed and loved being involved in all of the chores and projects. He enjoyed hunting, driving and working on his tractor and spending quality time with his family and friends. Paul was truly a product of the “Greatest Generation” and it was exemplified in all facets of his life. Paul was preceded in death by his parents; infant brother, John Lilly; sisters, Lucy Deen and Mildred Lilly; brother, Wade Lilly and nephews, Rolen Lilly and John Deen. Paul is survived by his wife, Theresa; daughter, Beth Starnes and husband Doyle; son, Roy Lilly and wife Ann; grandchildren, Elizabeth and Adam Byrd, Margaret Ann and Ryan Millett, Taylor and Lindsey Starnes; great-grandchildren, Henry, Avery and Adam Jared Byrd, Jr., Kingsley and Kollins Starnes, Lilly Ann Millett and Caroline Kelly Millett that is soon to arrive. He is also survived by his brother, Willie Lilly and his wife Virginia; nieces and nephews, Lauri Wasmuth (John), Lynn Dornak, Bud Lilly (Debbie), Kent Lilly (Jan), Gail Thigpen (Joe), Don Lilly (Amy), Ted Lilly (Cathy), Mason Deen (Alene) and many great-nieces and nephews. The family would like to express their deepest appreciation and gratitude to Tonya Arreguin and Ana Quintero for their dedication, compassion and steadfast care given to Paul and Theresa. A graveside service will be held on Saturday, April 30 at 10:30 a.m. at Rose Hill Cemetery in Tyler with Dr. David O. Dykes officiating under the direction of Stewart Family Funeral Home. If desired, memorials may be made to Green Acres Baptist Church (www.gabc.org) 1607 Troup Highway, Tyler, Texas 75701; Hospice of East Texas (www.hospiceofeasttexas.org) 4111 University Blvd, Tyler, TX 75701; or charity of one’s choice.

Paul Ford Lilly passed away peacefully on April 26, 2022, at the age of 97, at The Hospice of East Texas HomePlace in Tyler, Texas. He was born in Tyler, Texas on June 16, 1924 to Roy L. Lilly and Clara Nolan Lilly. Paul grew up in Tyler,... View Obituary & Service Information

The family of Paul Ford Lilly created this Life Tributes page to make it easy to share your memories.

Send flowers to the Lilly family.