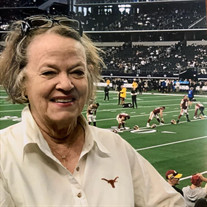 Peggy O’Daniel Leonard lost her year-long battle with cancer and entered eternal life on March 29, 2021. She was born January 16, 1949, in Nacogdoches, Texas, the daughter of Roy Leon and Eloise Tidwell O’Daniel. Peggy lived in Tyler 68 years where she attended John Tyler High School and First Baptist Church. She graduated from Stephen F. Austin with a bachelor's degree and earned her master’s degree from the University of Texas at Tyler. She had an adventurous spirit. After graduating from college, she took off on her own and traveled around Europe, staying in hostels. She loved to travel and continued traveling throughout her life. She was also an excellent tennis player and competed (and won) many matches in her 20’s and 30’s. In 1971, she was hired by Tyler ISD, and worked as a homemaking teacher for 49 years, 48 of which were at Hubbard Middle School. She met Henry Arthur Leonard, and they were married June 23, 1978. They had two sons, David Ryan and Mark Andrew. Peggy took joy in attending her boys’ soccer games and was always there cheering them on. She loved her boys and was so proud of their accomplishments and the men they have become. As homemaking teacher at Hubbard Middle School, Peggy Leonard, impacted generations of students and their families. She was a favorite among the students because she genuinely cared about and loved each one. She had a gift of building relationships with students so that every student felt that s/he was Mrs. Leonard's favorite. She was known for randomly bringing Chick-fil-a meals to students and teachers. Every student who was in her class has at least one "Mrs. Leonard story" - like the time a student heated the Chick-fil-a sandwich she had given him in her microwave, forgetting it was in a foil lined wrapper, causing a fire in the microwave and setting off the fire alarm which caused the entire school to evacuate the building. Or the former student who raced Mrs. Leonard in her Mini Cooper light-to-light on his way to high school. Everyone loved Mrs. Leonard because she could connect with them through their interests which she spent time finding out. Students from her class loved showing off the pillows, aprons, and Jams she had taught them to sew, and the Snickerdoodles, breakfast tacos, and pizzas they cooked were enjoyed by students and the teachers students shared them with. Mrs. Leonard was an avid Texas Longhorns fan and loved keeping up with sports and talking sports with her students. She attended the middle school sporting events to support her students and the high school sporting events to support her former students. As a world traveler, Peggy wanted to share her love for travel with her students. For over 20 years Mrs. Leonard accompanied Hubbard students to Washington DC and New York City on their annual 8th grade trip. Peggy Leonard was a wife, mother, grandmother, sister, teacher, entrepreneur, and friend, but perhaps her greatest legacy was her love of the students she taught. Although, in her homemaking class, students learned how to cook, sew, set a table, wash clothes and dishes, and iron their clothes, the greatest thing Mrs. Leonard taught them was that they were each special and that they mattered. Her legacy lives on through the thousands of students she impacted over the years. Without the iconic Mrs. Leonard, Hubbard Middle School will always have a hole that can never be filled. Hook ‘em Horns, Peggy! We’ll miss you! In addition to her parents, Peggy was predeceased by a sister, Linda Jean O’Daniel. Surviving in addition to her husband, Henry Arthur Leonard, are her son, David Ryan Leonard and his wife, Nicole, of Austin, TX.; son, Mark Andrew Leonard and his wife, Brittany of Albany, NY; brother, James Riley O’Daniel of Arlington, TX; Stepson, Michael Skee Leonard of Plano, and six grandchildren. Peggy will be put to rest in a gravesite burial service at Cathedral in the Pines with Chris Schustella officiating at 2PM Thursday April 1, 2021. Those who wish to remember Peggy in a special way may visit her tribute page at: www.stewartfamilyfuneral.com.

The family of Peggy Ann Leonard created this Life Tributes page to make it easy to share your memories.

Send flowers to the Leonard family.