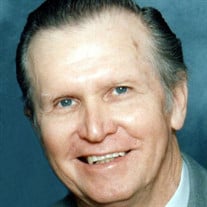 Services for Perry Edward Gibson, 82, of Bullard, will be held on Saturday, December 21, 2019 at 1:00 p.m. in the Stewart Family Funeral Home Chapel with Rev. Kelly Cinereski officiating. A graveside service will be held at 3:00 p.m. at Funderburk Family Cemetery in Palestine with Rev. Scott Gorbett officiating under the direction of Stewart Family Funeral Home. Mr. Gibson passed away December 16, 2019 in Bullard. He was born January 20, 1937 in Palestine to Perry Gibson and Della Collins. After graduating high school, Perry served in the United States Army and was stationed in Japan. Upon returning home, he married Connie Jean Young in 1957. They moved to the Pasadena, Texas area, where they raised their two sons, Mark, born in 1958 and Rusty, born in 1961. Upon retiring from Oxy in 1992, Perry and Connie moved to their house that he built on Lake Palestine. Perry spent many wonderful years on the lake enjoying fishing and hosting many family gatherings. They joined County Line Baptist Church, where Perry served faithfully as a deacon for many years. He was most recently a member of Noonday Baptist Church. Perry spent the last 17 summers in Seward, Alaska, where he made many wonderful friends and attended Resurrection Bay Baptist Church there. He loved fishing in Alaska and entertaining many friends who came to visit. He truly loved his summers in Alaska. Perry was a wonderful person who never met a stranger. He was always willing to lend a hand whenever he was needed. He was a strong Christian with unwavering faith and a tireless worker for the Lord. Perry was preceded in death by his wife, Connie Gibson; his son, Mark Gibson; and his parents. He is survived by his loving family including his son, Rusty Gibson and wife Lissa; grandsons, Joshua Gibson and wife Ashley, and Shane Gibson; siblings, Nancy Neal and husband Conrad, Elyse Gibson, Mike Gibson, Terry Gibson and wife Kathy, and Ann Morton; sister-in-law, Sherry Kirkwood and husband James; as well as numerous nieces, nephews, and cousins. Perry completed his earthly journey on December 16, 2019. He will be celebrating Christmas in heaven with Connie and Mark in the presence of Jesus. Pallbearers will be Joshua Gibson, Shane Gibson, Randy Porter, Jeff Porter, Shannon Blakeney, Tim Langston. Visitation is scheduled from 11:00 a.m. to 1:00 p.m. on Saturday, December 21, 2019 at Stewart Family Funeral Home, 7525 Old Jacksonville Highway in Tyler.

Services for Perry Edward Gibson, 82, of Bullard, will be held on Saturday, December 21, 2019 at 1:00 p.m. in the Stewart Family Funeral Home Chapel with Rev. Kelly Cinereski officiating. A graveside service will be held at 3:00 p.m. at Funderburk... View Obituary & Service Information

The family of Perry Gibson created this Life Tributes page to make it easy to share your memories.

Services for Perry Edward Gibson, 82, of Bullard, will be held...

Send flowers to the Gibson family.