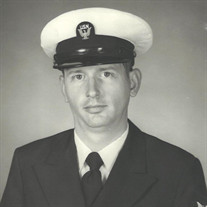 Chief Petty Officer Rex Julian Ellis passed away Friday, February 4th, 2022 in Tyler, TX. Rex was born on July 5th, 1949 in Dallas, Texas to Louis George and Mary Quinn Ellis. Rex was preceded in death by his beloved grandmother, Hannah Quinn (Munny) of Tyler,TX; his parents, George and Margaret Ellis; his brother, Capt. GJ Ellis; and older sister, Diane Vella of Mobile, AL. Rex is survived by his loving wife of 50 years, Sandie J; his two sons, Matthew Edward of Portland, OR and Joseph Michael of Virginia Beach, VA; one sister, Patsy Cappadona (Lou) of Prescott, Arizona; sister-in-law, Susan Ellis of Chambersburg, PA; brother-in-law, George Vella of Mobile, Alabama; his grandchildren, Courtney Rose Olson (Michael), Solomon Bleu, Zeki Tananger, Milo Julian, Charles Quinn of Portland, OR, Audrey Nicole and Corbin Joseph of Middletown, RI; and one great-granddaughter, Frances Rose Olson; and numerous Nieces and Nephews. Rex attended St. Thomas High School in Houston, Texas. To further his education, he attended the University of Notre Dame at South Bend, IN, where he met his future wife Sandie Bolin of Niles, MI. Rex joined the Navy in 1977. During his career, Chief Ellis served on numerous Naval ships and had the opportunity of seeing much of the world while traveling the globe. He also was an instructor at the Naval Training Facility in Dam Neck, VA. In the early nineties, Rex was stationed at MOTU4 at the Naval War College in Newport, RI where not only did he commit to his daily duties but also took part as "Special Advisor" for Pinochle. Rex served in Desert Storm in 1991. He was later honored for his service in Desert Storm with a Medal of Accommodation presented to him by the government of Kuwait. After retiring from the Navy, he and Sandie moved to Billings, MT where he continued his career in Electrical Engineering with Mark Rite Lines. Rex spent his last years with his wife Sandie in Tyler, TX where he worked a short time doing electrical work for DPX an Oil Rig Equipment Company. He enjoyed traveling, learning about his Ancestors, and tinkering with old trucks (he owned one), motorcycles, and old motors. He could build and fix just about anything. He loved going to the VFW every evening for a couple of beers and playing a good game of Chess every now and then. He had an " old grouchy" exterior with a sweet "soft spot" for his wife, his sons, and his grandchildren.

An inurnment will be held at a later date at DFW National Cemetery in Dallas, Texas