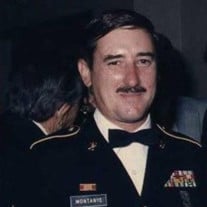 Services for SGM Richard Harry Montanye, 73, of Tyler will be held on Saturday, May 29, 2021, at 2:00 p.m. at Stewart Family Funeral Home with the Cathedral of the Immaculate Conception officiating under the direction of Stewart Family Funeral Home. SGM Montanye passed away Tuesday, May 25, 2021, in Houston. He was born August 18, 1947, in Schenectady, NY to Roland Harry and Ruth Morey Montanye. Richard was a member of The Cathedral of the Immaculate Conception. He was in the United States Army for 23 years and retired as an E-9 Sergeant Major. Upon retirement he served the Civil Service for approximately 15yrs. Richard is survived by his loving family including his wife, Kim Montanye, Richard & Terri Montanye of West Virginia and their sons Trey, Ryan, Cole & Rex. Louis Montanye of Dallas and his son Louis Montanye Jr. Robert & Amy Montanye of Tyler and their children, Alyssa Stone, Ryan Bland & Allison Shockley. Tyler & Adriana Montanye of Utah and Brooke Chinen of Houston. A Rosary is scheduled from 12:00 – 1:00 p.m. and visitation is scheduled from 1:00 – 2:00 p.m. on Saturday, May 29, 2021, at Stewart Family Funeral Home, 7525 Old Jacksonville Highway in Tyler. In lieu of flowers, the family requests a donation to Texas Wounded Warrior Foundation 4301 Fillbrook Ln, Tyler, TX 75707 (903)565-0335 www.txwoundedwarrior.com in honor of Richard H. Montanye.

The family of SGM Richard Harry Montanye created this Life Tributes page to make it easy to share your memories.

Services for SGM Richard Harry Montanye, 73, of Tyler will be...